Shvembldr is one of the biggest artists in the NFT space with millions of euros revenue, but now his income and assets have been seized by the Latvian police. Is NFT art a crime? 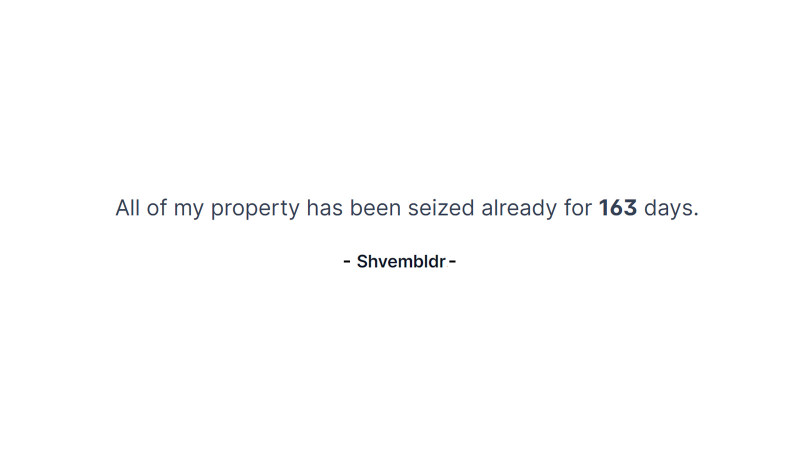 It’s the kind of horror story that decentralisation and Web3 were supposed to prevent. A popular NFT artist has their property and assets seized and held by the police without explanation. After three long months of confusion and fear, the artist finds out that they’re being charged with money laundering despite all their transactions being fully public. It sounds dystopian, but that’s exactly what happened to Shvembldr on the day that his “normal life ended.” 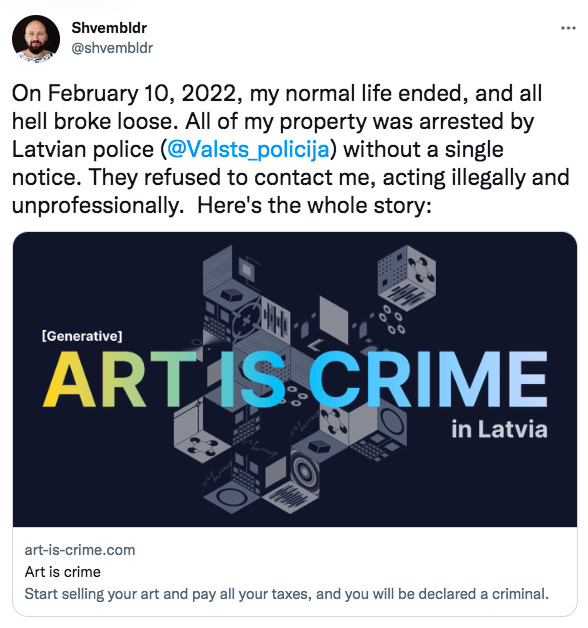 One of the biggest artists in the space 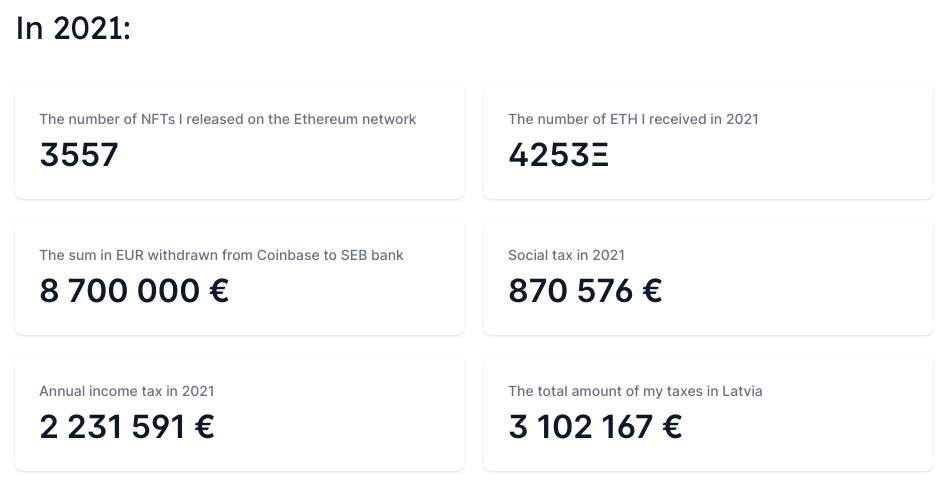 Everything began to unravel on February 14th when Shvembldr noticed that his card wasn’t working. He discovered that the Latvian police had blocked his bank account and seized all of his assets. Almost overnight, he’d lost all access to all funds.

In his own words:

“It's hard for me to predict what will happen next. The situation can unfold most unpredictably. […] It is quite challenging to create in such circumstances. The fact that this story will leave a strong imprint on me as a person is undeniable. And how it will express itself in my art, I don't know.”

You can read a full account of the legal proceedings on Shvembldr’s Art is Crime website, set up to garner public attention about the case (it's exceptionally detailed with documents, letters and timelines). It describes a system mired in bureaucracy that operates at a snail’s pace and without transparency.

Shvembldr lists all transactions in painstaking detail on his website: https://www.art-is-crime.com/data/coinbase

Centralised authority at its worst?

It took Shvembldr three months to find out about the charges levelled against him. At points, the power structures involved refused to work with his lawyer (who had power of attorney). He was left bereft and unable to pay bills, make purchases or - ironically - pay his taxes. As to why the police would act in this way, Shvembldr isn’t so sure:

“This is either incompetence and ignorance or criminal intent. There is no way I can explain the reason for withholding documents from me that were supposed to be issued on the first day. They kept me in the dark for three months and there is no rational or legal explanation.”

Certainly, Shvembldr appears to act with the utmost transparency. His official crypto wallets are listed on his website, along with all the marketplaces he uses. All the income data from his various projects is listed, too. Wallets, transaction histories, transfers and sales are all laid out exhaustively.

Aware that crypto is fairly new, Shvembldr writes that he consulted the State Revenue Service and the bank about how much tax he needed to pay. The result was over €3 million, a contribution he says he was happy to make to his country. He describes a feeling of patriotism which, despite his troubles, hasn’t diminished:

“I believe […the seizure…] results from the incompetence or criminal intentions of certain people in the power structures, but I do not think it is a problem for the whole country. That's why I'm appealing to common sense. I consider it one of my tasks to help eradicate such incidents. I believe that my country is moving in the right direction. I hope to stay in my country.”

When contacted for comment, the Latvian police were less forthcoming: “in the interest of the investigation, we refrain from commenting this case at this time.”

Social media has been supportive of Shvembldr’s plight, but for a counter-narrative from @BoringSleuth. He levels multiple accusations at Shvembldr via a series of threads. Some of these involve the use of burner wallets to flip NFTs and pump the price artificially. One such flip was allegedly big: from 0.15 ETH to a massive 6 ETH.

On the theme of alternative wallets, @BoringSleuth accuses Shvembldr of impersonating a woman to sell his work under a new identity (a claim the artist lambasted in his chat with us). He also suggests that Shvembldr is using the identity @MonkMatto to sell work (citing how the wallet has 20 pieces from Shvembldr, none of which it paid for). The threads also allege to show a big $120K transaction between Vincent Van Dough and Shvembldr for “no known reason” and bizarrely suggest that he owns Ramzankadyrov.eth. Kadyrov is a vicious warlord associated with crimes including genocide.

Unsurprisingly, Shvembldr struck back at what he terms a “pseudo investigation” and suggests that @BoringSleuth has tried to pressure his friends into making false statements:

“He's just crazy. He has already accused me of pretending to be a woman and that I am a different person and has written to my friends to "confess that they are me". Unfortunately, 99% of people don't read the walls of text I wrote on the site to explain the situation, and if they see such tweets, they willingly believe them without even trying to understand what it says. I think he's fighting for attention. That's all these people need.”

Nonetheless, Shvembldr has received some online hate. What does he make of that, when he’s already embroiled in legal struggles offline?

“I act openly and put out all possible data precisely because I have not violated not only criminal laws but also moral laws. I have never bought my art myself or resold it. I did not participate in any schemes. I can justify each of my transactions. I have the transaction reports ready for the police on the website and all of my Twitter and Discord activity from 2021, including personal messages. I'm completely clean, but it would take many resources for the police to verify all this, and I'm afraid they won't do that - it's easier for them just to accuse me. That's why I went public with it. The investigation must be honest, and this case must become a precedent.”

A robust response in a case that still has a long, long way to run. Its ramifications for crypto, NFTs and DeFi more broadly are massive.