Yuga Leaks: the Ship That Refuses to Sink 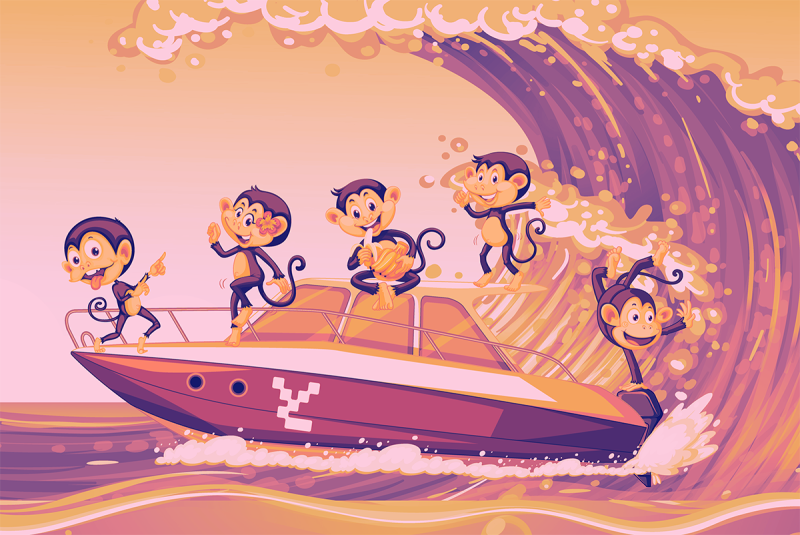 From the giant gas war of the Otherside land sale to covert Nazi symbolism to pre-announcement pumps, it seems that despite Yuga Labs being the biggest NFT company in the metaverse and owning the rights to some of the strongest communities in the space, it has recently been the centre of attention for all the wrong reasons.

For the sake of easy reading, please be advised that timelines are based on the Central Time zone.

Highest Trading Volume of the Year for CryptoPunks

According to on-chain data analysis, as of June 19th at 2PM, 175 Punks had been traded in the last 48 hours, amounting to over $14 million at the time of writing. Transaction volume increased from  Ξ200 to Ξ4,000 in just a few hours – making June 18th the highest volume trading day of the entire year for the CryptoPunks collection. These numbers stand out starkly, especially considering the severe bear market conditions. 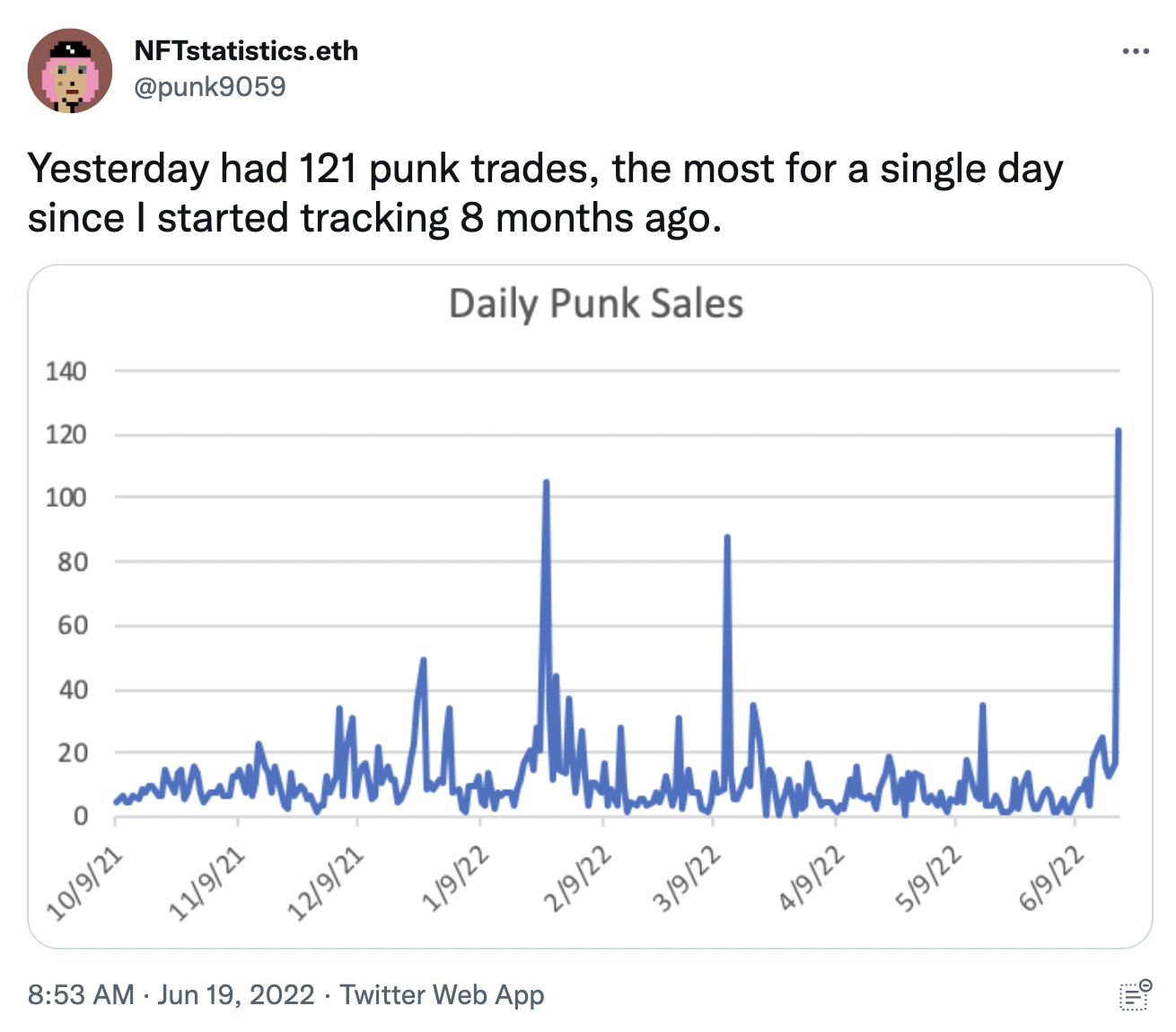 So why the sudden pump? Yesterday, Greg Solano aka Gargamel, co-founder of BAYC, announced Yuga Labs bringing on Noah Davis as Brand Lead for CryptoPunks – a key player on Christie’s NFT team and the brains behind Beeple’s infamous NFT which was sold for $69 million in March 2021, a never-before seen record at the time.

Pre-announcement sales volume surges are nothing new to Yuga Labs; you could even say that it has become a pattern. If these pumps are purely coincidental, then these are insiders taking advantage of non-public information leaks to make a profit aka insider trading, which is essentially a wealth transfer from unsuspecting holders to a privileged select few. Knowing what’s to come certainly provides a strong advantage, and what better time than now to snipe a few Punks when liquidity, morale and ETH price are low.

Let’s take a look at a couple times where this has happened before, bearing in mind that other instances may have been missed out – this only paints a part of the full picture.

The launch of MAYC and the airdrop of Mutant Serums to BAYC holders was publicly announced on August 27th, and the sale took place on August 28. Looking at the weekly trading volume of the BAYC collection, pumps in volume were happening every single day starting a week before launch date.

This could be due to BAYC gaining popularity during NFT summer, but it also can’t be discounted that a few insiders could have been anticipating a surge in prices after the MAYC collection drop.

A week before the IP acquisitions were officially announced on March 11th, the weekly transaction volume of Punks reached an ATH at Ξ24,006, again pointing towards the fact that some people knew the news beforehand and were anticipating value increase.

Regarding most recent events, Wazz made a comprehensive thread analysing the on-chain activities of the top Punk buyers in the last 48h, some of which are presumed insiders. These include a wallet address which was freshly funded with Ξ700 from Coinbase and bought 8 Punks hours before the announcement, whilst another belonged to Beanie whose wallet hadn’t been active for 3 months prior and who was supposedly on hiatus. 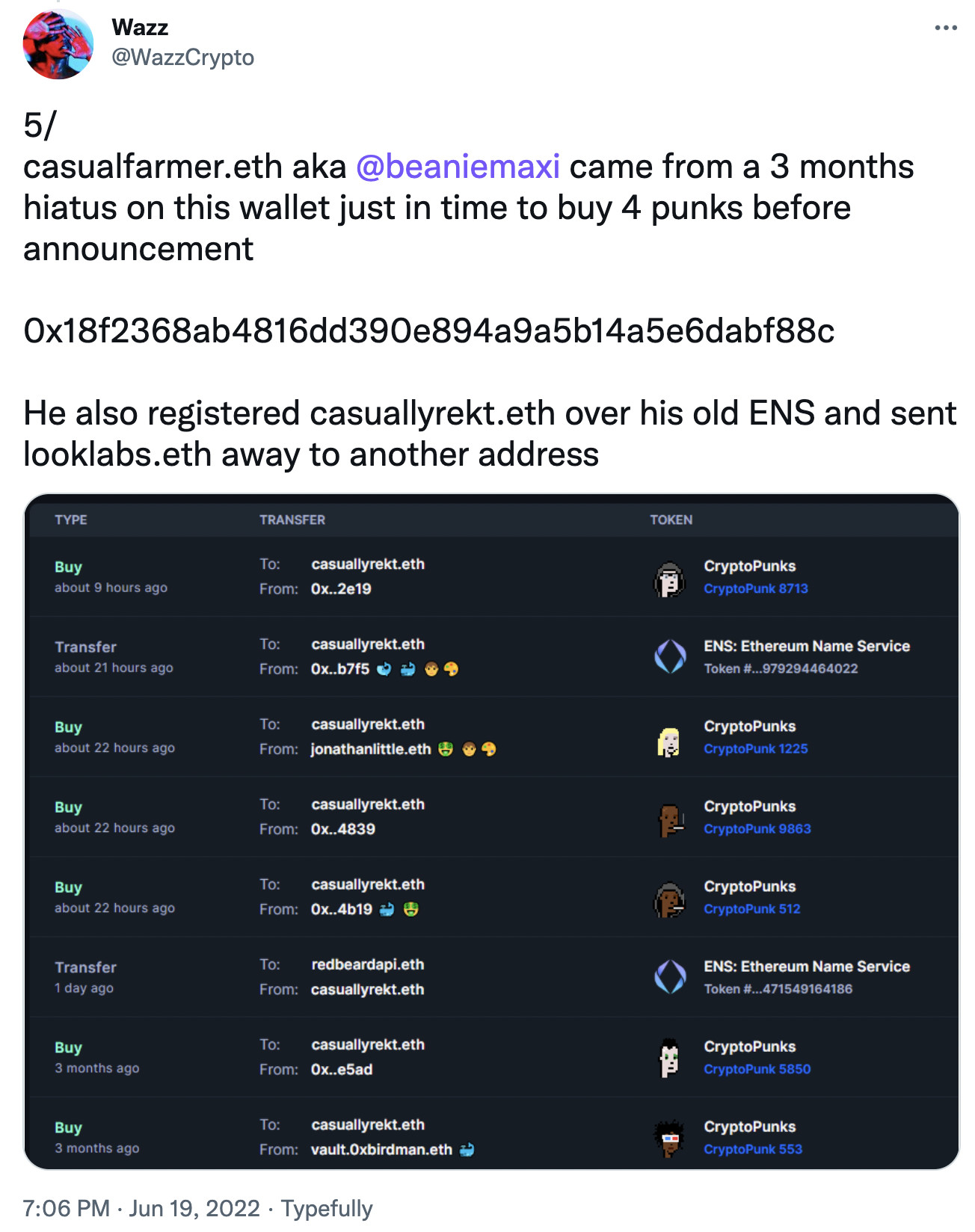 All of these front runnings have not passed by unnoticed by NFT community members, who have been outspoken about the emerging insider trading pattern. Yuga Labs’ major missteps over the past months may be beginning to tarnish their reputation, but for the meantime it looks doubtful that they will address these issues.

Nonetheless, the globally leading NFT company is valued at $4 billion and backed by some of the most notorious of celebrities as well as influencers. No matter the leaks, this ship refuses to sink.