Rekt: Collector Scams Himself out of 100 ETH

The NFT space is full of scams but few people have managed to rek themselves as comprehensively as @franklinisbored. He’s down 100 ETH after forgetting to cancel a joke ENS bid. 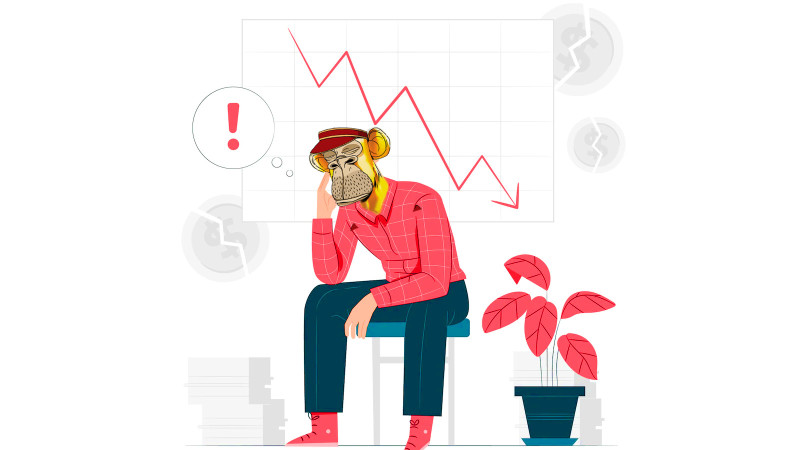 The NFT space is full of scams but few people have managed to rek themselves as comprehensively as @franklinisbored. The unfortunate collector sold his ENS domain name for 1.9 ETH but forgot to cancel his own, joke bid of 100 ETH on the same name. Another wallet promptly accepted the 100 ETH bid, selling the domain back to Franklin and leaving him seriously out of pocket. Jokingly termed by some as a “self-scam” the story provoked a hilarious reaction across Twitter.

Franklin is the 7th biggest BAYC holder (he has 57). He’s a big player in the NFT space with over 114k followers, which is proof that anybody, regardless of their experience, can make a mistake. The loss of $150,000 started as a joke between fellow collectors. The aim was to create a ridiculous ENS domain and then put in a ridiculous bid. This would hopefully trigger the @EnsBidsBot to tweet about a 100 ETH bid, proving how pointless those automated bid accounts are.

The collectors settled on a suitably absurd name: stop-doing-fake-bids-its-honestly-lame-my-guy.eth. This was minted from Franklin’s alternate wallet. Surely nobody would bid on such a terrible name, right? Franklin placed a 100 ETH bid as a joke, but imagine his surprise when somebody put in a genuine offer of 1.9 ETH. It seemed like easy cash, Franklin accepted and @EnsBidsBot held up its end of the bargain by tweeting about the sale.

Unfortunately, in his rush to celebrate on Twitter (see the screenshot below) he also forgot to cancel his 100 ETH offer. The new owner accepted the bid and sold stop-doing-fake-bids-its-honestly-lame-my-guy.eth back to Franklin in what has to be one of the biggest flips of all time. Since then the buyer has been on a shopping spree and even holds a big Milady bag, much to the amusement of Franklin’s followers. Their collection also includes another ENS: franklin-this-one-is-worth-100-ETH. 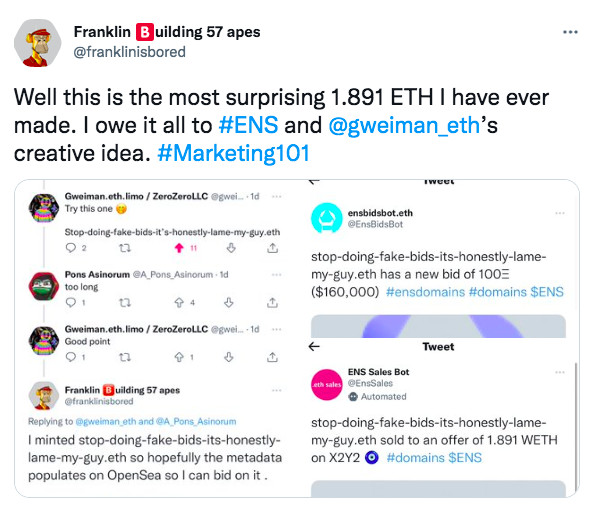 All in good spirits

Franklin met disaster with a smile and admits that he deserves “all of the jokes and criticism” (of which there’s been a lot). He sent an NFT entitled “An embarrassing mistake” to the buyer, explaining what happened. Despite refunding the original 1.9 ETH and hoping to reverse all transactions, Franklin concedes “I understand if you want to keep the profits.” A curt response “No, thank you for the money though” suggests that he won’t be seeing that 100 ETH again. 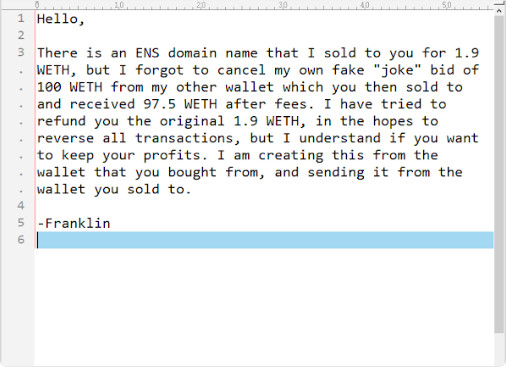 Meanwhile, the other collectors involved in the joke are celebrating their part in making history and brokering “the 4th highest sale in $ENS history.” They also succeeded in their initial aim: EnsBidsBot got busy tweeting the various sales. For all the jokes and humour, this is a cautionary tale. If it can happen to one of the most active, proficient and experienced collectors in the NFT space, it can happen to anybody. Be careful unless you really, really want a place in the crypto history books.