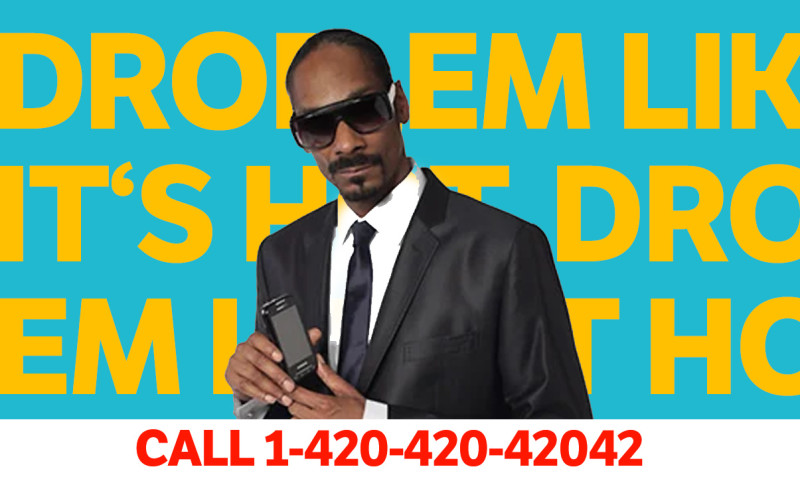 In the increasingly saturated market of NFT art, most creators would be grateful for a celebrity endorsement. Celebrities don’t get much bigger than Snoop Dogg (who currently has 20.2 million followers on Twitter plus another 254k if he definitively is Cozomo de Medici) so an endorsement from him can only be a good thing, right? Fortunately, Snoop Dogg has quite a long history of endorsing anything that appears in his path… 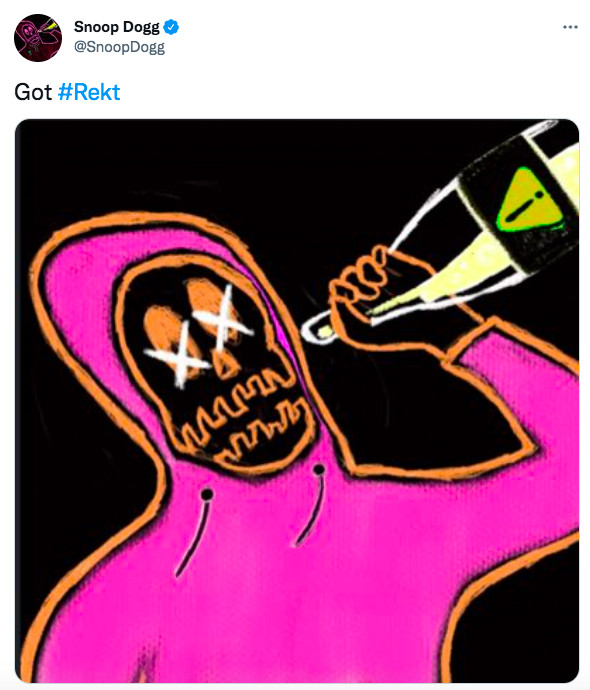 Snoop Dogg’s most recent endorsement is only a few days old. On 28th May he simply tweeted “Got #Rekt” accompanied by an image of his newly acquired Rekt Guy. Snoop bought two of these heavily stylised, urban aesthetic NFTs. Rekt Guys are interesting because they were created by an ex-Barclays financier who quit to pursue NFTs full time. Predictably, the price of Rekt Guys soared on the news, with one Twitter user dubbing the pump “The Snoop Dogg Effect.” 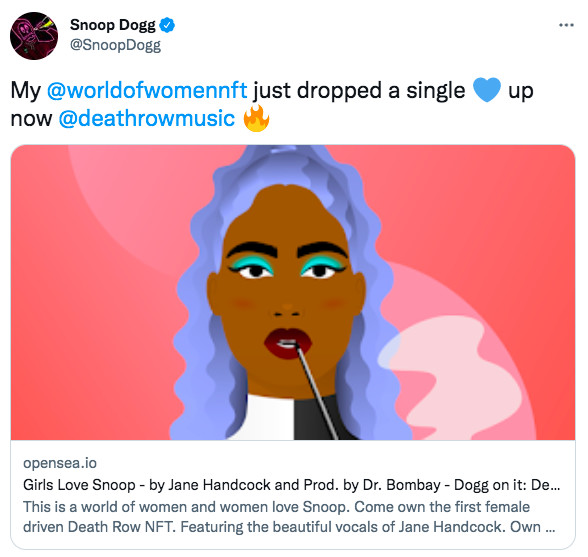 WoW is now one of the biggest NFT collections in the world, not to mention one of the most socially important. Snoop’s acquisition of WoW #3292 was part of an ongoing experiment with his Death Row NFT Collection. The WoW in question now has her own mixtape (featuring Jane Handcock). The music is inextricably tied to the NFT. Anybody who buys #3292 will simultaneously receive copyright for the music. This (obviously) makes #3292 extremely valuable.

Purchased via his (supposed) alter ego Cozomo de Medici, Snoop mooned the CrypToadz floor when he forked out 140 ETH for #4236. If that seems like a vast amount, the collection’s value skyrocketed by 491% in the wake of his purchase, so the investment was certainly a sound one. Snoop owns (according to Portfolio Tracker) a further 8 CrypToadz and his endorsements have pumped the price ever higher. Whether you’re convinced that Snoop is Cozomo or not, the similarities between their shopping habits are hard to deny. 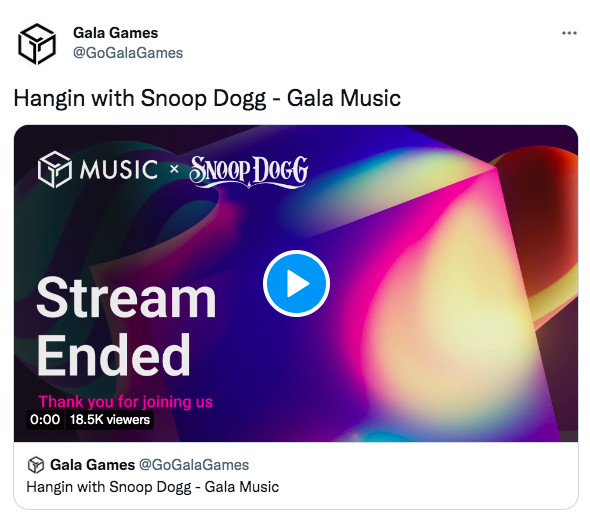 GALA is one of crypto’s biggest success stories and a large part of that is down to Snoop’s endorsement. It's the native token of GALA Games. Although it's largely a gaming token it has wide utility and is actively traded between players for unique NFTs and in-game experiences. Even as crypto struggled this year, GALA continued to surge, at one point more than doubling in value over a week. Snoop has been vocal about his support for the token. The team (unsurprisingly) posts a lot about “hanging” with the famous rapper. The Dogg seems heavily invested in Gala, releasing exclusive albums on Gala Music as well as special Stash Boxes.

Snoop Dogg didn’t just endorse The Sandbox; he threw his whole body weight behind it, dropping a collection of “Doggie" avatars. Snoop’s presence in this Metaverse world is a big deal. Someone has already paid $450,000 for a plot of land next to the rapper. Snoop even released an original track to celebrate his new collaboration. The Sandbox is a big player and one to keep an eye on. It will be shaping the Metaverse in the years to come.

Don’t presume for one moment that Snoop limits himself to the Ethereum chain. The Cardano network is home to Clay Nation, a set of 10,000 generated clay characters. The project is also expanding into a full “Clayverse,” a kind of virtual festival where holders can hang out and explore different areas including Sonic Village and Underworld. That’s where Snoop comes in. A collaboration with the rapper will see unreleased music, unique collectables and plots of land auctioned off within the Clayverse. 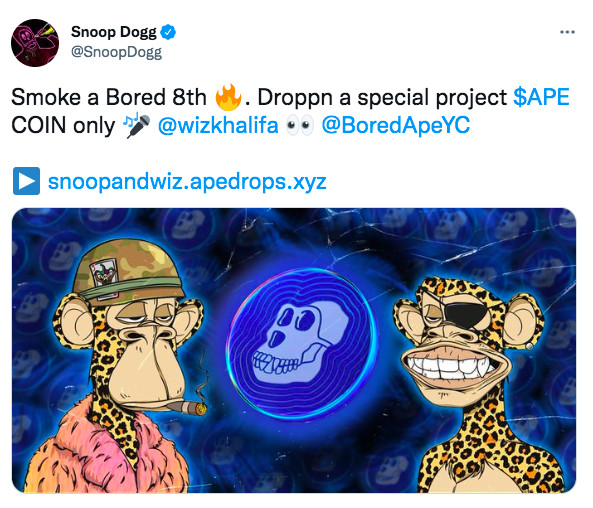 Snoop’s endorsement of $APE couldn’t be much more resounding: he released a musical NFT collection that could only be purchased using the coin. Entitled ‘Ape Drops 03: An 8th’ the NFT featured 8 new tracks in collaboration with another superstar; Wiz Khalifa. Snoop owns a BAYC (#6723) but this backing of $APE was quite astounding and has helped the coin endure the current crypto storm. Yuga has always leveraged celebrity endorsements to great effect but this is one of the biggest.

Endorsements don’t come much higher than videoing yourself making a purchase, but Snoop was determined to let the whole world know he’d joined the Invisible Friends family. A short Twitter video shows him making the purchase (for 5.9 ETH) in his record studio. The Invisible Friends team were, of course, quick to retweet and the floor price duly adopted an upward trajectory. Much like WoW #3292 this NFT is owned by Death Row and will be used for musical projects.

So those are some of Snoop’s biggest endorsements but for a man who seems smitten with NFTs (and willing to endorse nearly anything), they’re a drop in the ocean. He also regularly tweets asking for NFT recommendations, making him possibly the biggest account to ever create a shill thread.

Oh, and the strange incident of the Cozomo doxxing? Whether you believe that Snoop really is Cozomo or not, you can’t deny that both parties have done a fantastic job enlarging the space and supporting projects big and small.

5 Things You Didn't Know About ApeCoin