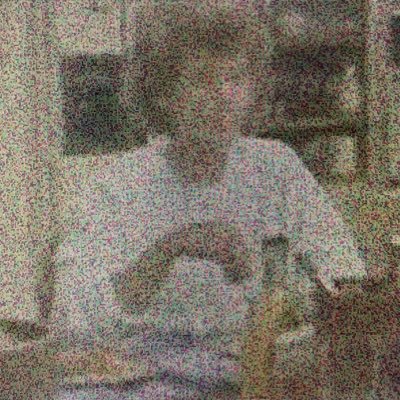 I spoke with snax.eth , the founder of PizzaDAO, about the DAO’s plans for Bitcoin Pizza Day on May 22nd, the process of onboarding new pizzerias, and other new projects the DAO has coming down the pike.

This interview has been edited for length and clarity.

So, describe for a newbie: what is PizzaDAO?

PizzaDAO is a DAO where our manager is pizza. Pizza wants to be eaten, and we think we can help by making it free every year, potentially forever. The other goal is to support independent pizzerias. We can have them tokenize so that they can be owned by their communities. One of the big promises of Web3 is to keep wealth in communities by enabling community ownership, and honestly pizzerias are a good place to start because they’re everywhere.

Beyond that, independent pizzerias are all making the same product, but they don’t have the economies of scale that the big pizza chains have, and so we think about how we can offer them that support, as well. They’ve been talking about this in their industry for a very long time. Isn’t it a tragedy that Domino’s has the technology and serves gross pizza?

So if we can build this network of pizzerias and align the incentives so we can build them software and help them with supplier relationships, help them with knowledge base stuff and with hiring and community building, then we can offer them some of the economies of scale that really large entities have. 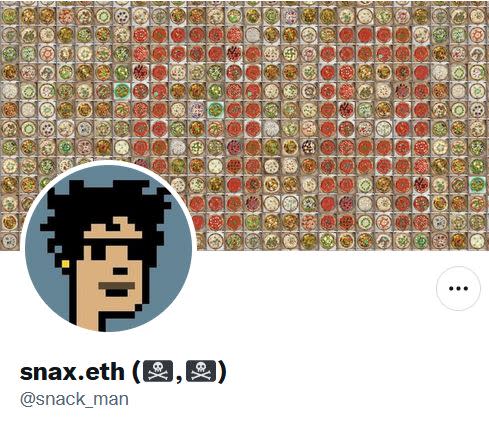 An independent pizzeria in a community is a gathering place, they know everyone. We gave $625 each to these pizzerias and said, give away $500 of pizza and give your staff $125. They knew what they wanted to do with it because they know their community. Many of them gave them to local charitable organizations or schools. It was different in every place. Some gave it to customers and that’s great, too. We let them decide what they wanted to do. Because we trust the pizzeria.

Give us a taste of what’s coming up for the next Bitcoin Pizza Day.

We plan to be in over 100 countries this year. There were a lot more COVID restrictions last year, so we weren't able to set up any gatherings, and that's a new thing we're doing this year. We're planning parties specifically for the Web3 community, so that we can come together and meet each other, especially around this idea of pizza as a public good, of community-owned small businesses, and we can center a conversation about that at our events all over the world. 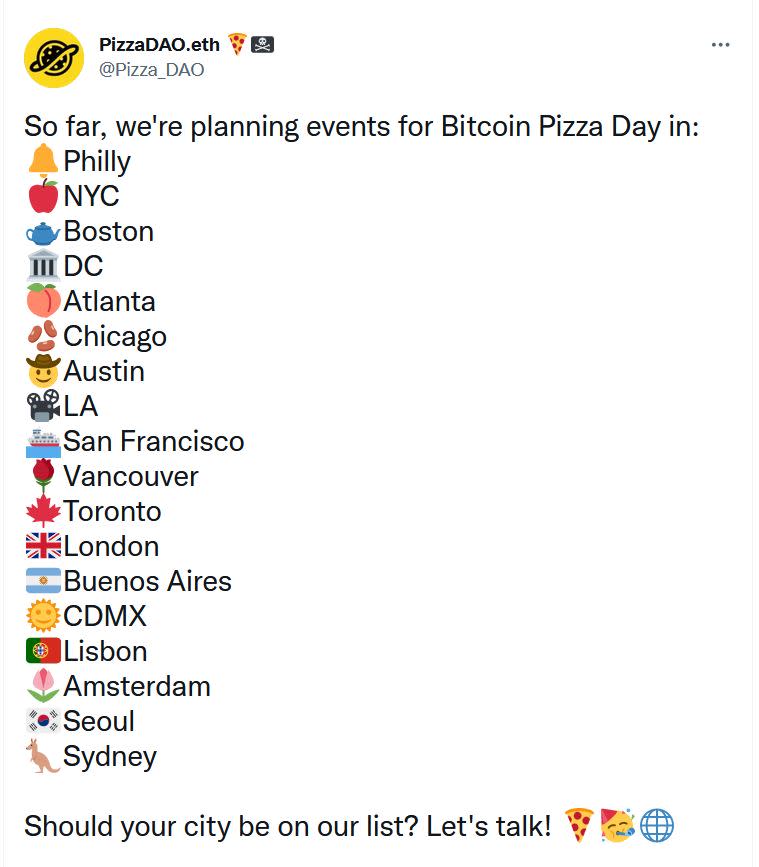 We're planning parties in Seoul, in Sydney, in Karachi, in Amsterdam and Berlin and Lisbon, in Buenos Aires, in Mexico City... in a ton of cities in the US, we're shutting down a whole block in Little Italy. We're taking over the Sky Deck at the tallest tower in Chicago. We're taking over an iconic nightclub in San Francisco.

When we do these events, everywhere we can have a screen, we'll make sure that footage is coming in from all over the rest of the world of people eating pizza together, so that people can really feel the sense of global community. Because that's what it's about for us. DAOs are like nation states, in a way. We joke that we'll have people running in the Pizza Party and winning elections.

These live events are taking place in so many countries and continents. Are there any challenges with coordination?

Navigating local relationships and communities. I haven't been to Prague. I don't know who's in their local community. We've dealt with several interpersonal dramas that we have no idea about.

With aligning the parties, we just put a stream on a screen. There are probably more exciting things you can do but when you think about it, the minimum that we can do that we know we can do, and maybe next year we can do more crazier stuff.

What is the process of onboarding pizzerias like? Is it easier or more challenging this year?

It's a bit easier this year because we have the proof that we did it last year. We have pictures and videos and say “look, we're real.” I learned that the thing that you say when you call a pizzeria is not, "Hi, we're throwing a global pizza party powered by the blockchain. Do you want to be part of it?” The thing to say is “Hi, we'd like to buy $500 worth of pizza on May 22nd.” Then they say let me get my manager. Then you say, “'Hey, yeah, we'd like to buy $500 worth of pizza, but actually, we just want you to give it away to your community.”

They say what, we say, “Yeah, because we're throwing this global event about everyone on Earth enjoying pizza together. And we're gonna tip your staff $125 on top.” That usually seals the deal, shows that we have good intentions. And from the pizzeria's perspective, if they don't get the money, they don't have to give away any pizza. Because we send them the money first. If they trust us and we don't get the money to them in time, then sure, some of them last year did that. But we paid them.

Besides Bitcoin Pizza Day, does PizzaDAO have any plans for this year?

We have some plans for perks for our NFTs at pizzerias, as well as for other NFT collections that may want to use our network of pizzerias to offer perks.

Our pizzeria partner in San Francisco is opening a new pizzeria in the summer of 2023 and they would like to tokenize it. They may be one of our first pizzerias to do that.

Our pizzeria partner in Paris also is really excited about tokenizing and wants to sell 30% of their business as tokens.

We're like the only Web3 catering organization, it seems. So some people started to reach out to us to be their caterer, which is not something we expected. I think it's pretty funny.

I don't know if this is gonna happen this year, but one of our plans to offer economies of scale to these independent pizzerias is to build them software. The delivery industry in particular is really bad for small businesses. They take a huge percentage of the money. And it's just really hard for the business to be profitable. And they don't own the delivery software in any way. So it's kind of risky to be building your business on this software, and so we're going to gradually be building those parts of the software, and we’ll build them open source.

And because this is not just about pizza. We do it with pizza because pizza is a global thing and everyone knows pizza. This is a model. And we intend these tools to be used by anyone who wants them, not just pizzerias. That's why we build them open source.

Pizza is one of the most popular foods in the known universe. So it only makes sense. It's community in a box. Sharing is baked right into it. It's in the slices. It's the most shareable food.

Web 3 is about consensus around a lot of different things. We made a token that represents people's belief that we should throw a global pizza party. When people buy it, they are breathing life into this concept. We're like the federal reserve of free pizza. We believe that people get to make our treasury have value by buying our tokens to support the mission. So we can start to build consensus on other stuff. We’re building consensus on pizza, but there already is consensus about pizza. We just get to tap into it and give it some more structure through Web3.

That's another reason why the Pizza Party is probably gonna be successful, because it's a pretty easy thing to agree on. It's a lot easier to vote for vibes than policy. When your vibe is everyone deserves pizza, that's pretty powerful.

How can folks find out about going to one of these live parties?

Right now, the best place to go is our Discord. As the parties approach, we'll have a web page with the details on all of them. Obviously, our Twitter will announce them as well.

To check out events for Bitcoin Pizza Day or to get involved, follow Pizza DAO on Twitter and visit Pizza DAO’s Discord.

6 Industries to Be Disrupted by NFT Technology

Empowerment and Accessibility: A Web3 Vision

Monopolistic Tendencies are Coming to Crypto

ENS Done Right: How to Set Up Your Profile Picture

How NFTs Are Fixing The Diamond Trade