NFT NYC Roundup - The Good, The Bad And The Cringe

The fourth NFT NYC convention took place this week, with much anticipation and excitement carrying over from last year. 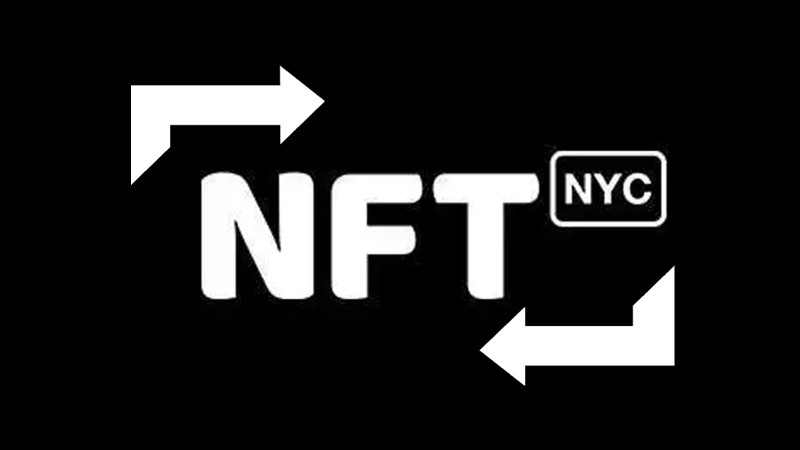 Granted, last year, the climate was very different for NFTs: the market was soaring, NFTs were hitting the mainstream, and some people wondered whether this was the advent of widespread adoption of crypto and NFTs. While adoption did spread, it was a bumpy ride that wound up in a crypto crash. And in its aftermath, this year’s NFT NYC event didn’t quite land the same way. 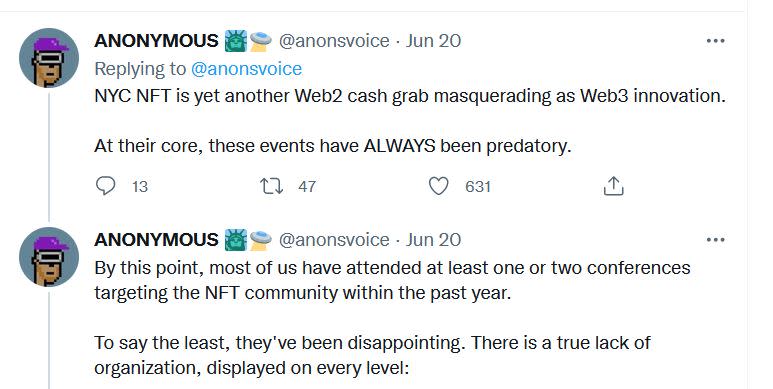 In a tweet that went viral, Tyler Stockfield, who had been scheduled to speak, announced he wouldn’t show up. His criticisms proved to be shared by others who were attending. Among his criticisms, Anonymous noted the bloated number of invited speakers (1500) as well as the sloppy promotion for his event, with major typos and the use of an Ape he didn’t even own for his avatar. This showed that “NFT NYC is just another Web 2 cash grab masquerading as Web3 innovation.”

Others in the NFT space also had similar criticisms, including that the speaker list consisted mainly of unknowns and covered overly broad territory more suited for new enthusiasts rather than veterans of the space.

Among the responses to Stockfield’s tweet, philtran.eth of MADWorld wrote that even though MADWorld was a sponsor in multiple venues, they had to write their own name tags. While some of these complaints reek of #firstworldproblems for sure, but this was not the least of the criticisms about NFT NYC.

When a large portion of attendees are techie types who spend hardly more than five minutes away from a screen at any given time, there’s bound to be cringe moments. Here are some of the moments that will stick in people’s minds for months to come. 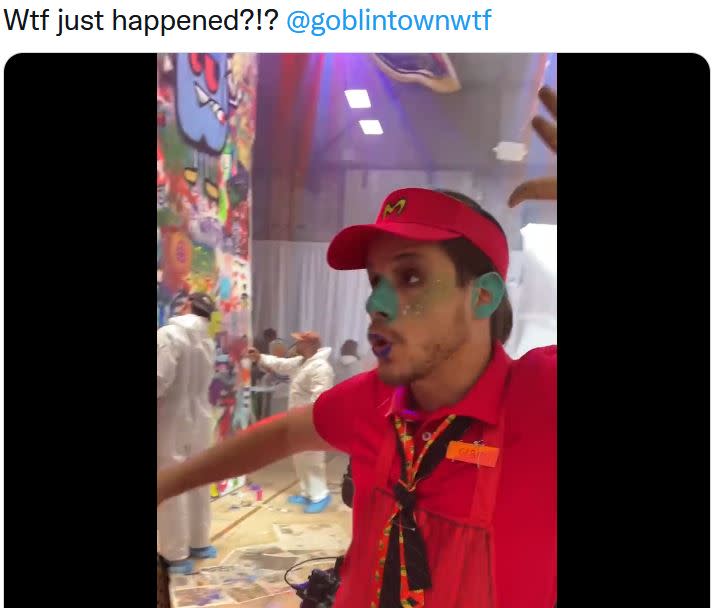 At NFT NYC, Goblin Town definitely brought the WTF. The McGoblinBurger installation and actors(?) playing the part of gibberish-speaking goblins certainly put some people off. But holders seemed to like it, and the party they hosted also turned out to be pretty wild.

The cringe risk turned out to be well worth it in the end, though. Goblintown wound up the big winner of the PFP projects attending NFT NYC, so holders are the ones who have the last laugh.

A Billboard Asking for a Date - Leading to a Proposal? 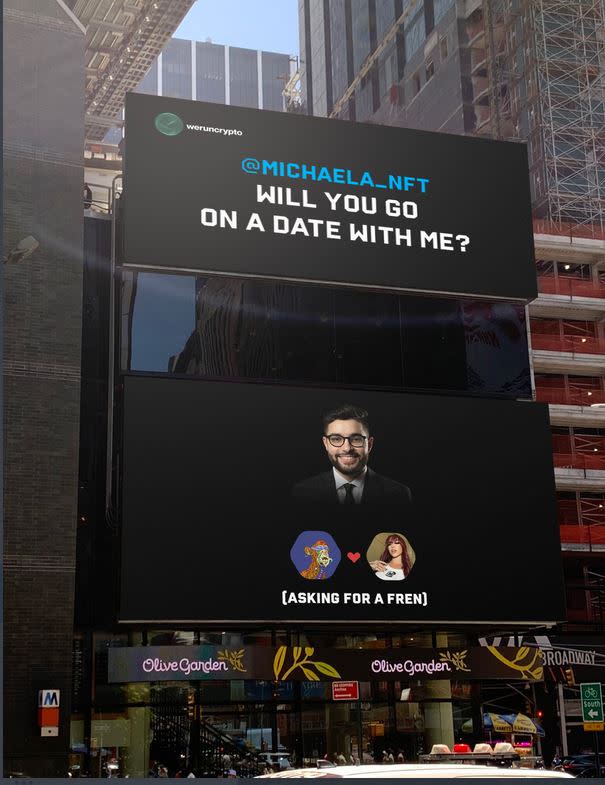 Much fun has been made of the fact that NFT and crypto events tend to be sausage fests, and sometimes, the desperation to bring more women into the space goes too far. In a very bold if cringey move, weruncrypto put out a billboard asking influencer Michaela NFT out on a date. The billboard appears to have been a stunt, as Michaela later posted a photo of them together that looks like a proposal, but there are less cringey ways to display your love.

In another moment that straddles the line between sincerity and satire, a bunch of people were protesting NFTs at NFT NYC, with signs that seemed to be styled after the Westboro Baptist Church. My money’s on satire, as most of the slogans on the signs were downright nonsensical: “Crypto is a sin”, “God Hates NFTs,” and “Vitalik is the Antichrist” are not arguments you hear from typical crypto naysayers. 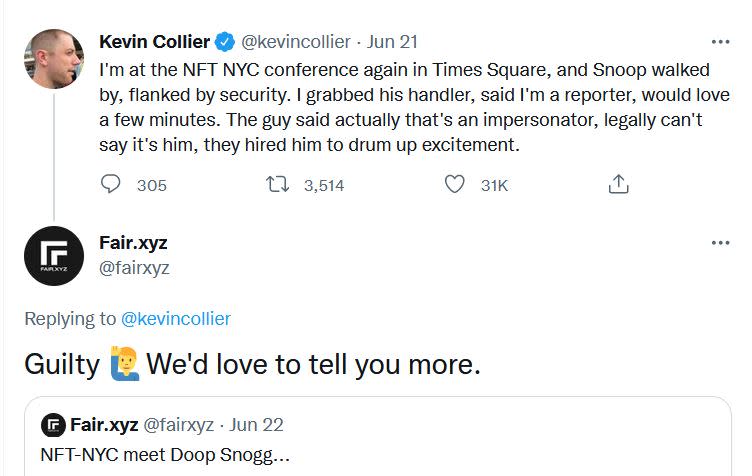 A Snoop Dog impersonator showed up, apparently hired to “drum up excitement” for the event, according to NBC reporter Kevin Collier. NFT site Fair.xyz claimed responsibility for hiring the impersonator, sharing an ad they made featuring him. Points for transparency, at least.

Of course, in massive events like this, there’s always someone who finds something to like about it. Some attendees have still been able to have a good time and connect with like-minded folks in the NFT community. People seemed to overall like the Cool Cats exhibition, and while not everyone had a good time at Ape Fest or Goblintown’s party, some people certainly did. And of course, the small-and-cozy poetry corner of the otherwise vast NFT space had their own good time. 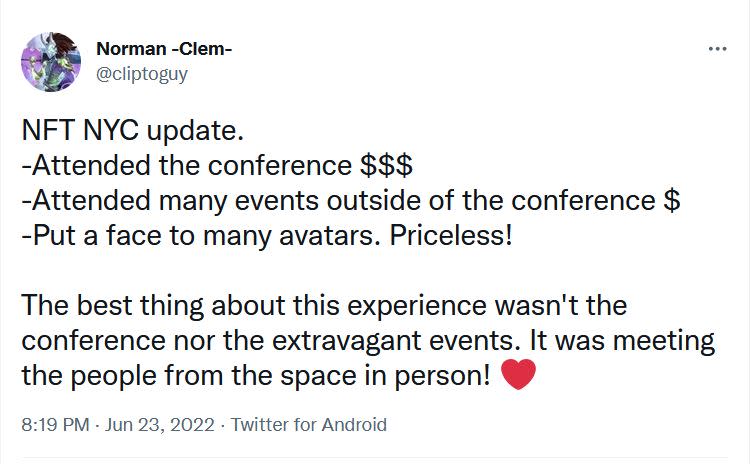 As with a lot of large-scale things, there as yet seems to be no consensus on whether NFT NYC this year was a win or a setback for the community. We’ll see next year how the NFT NYC vibes will shift.