Minecraft Says ‘No, Thank You!’ to Blockchain and NFTs

Mojang, the creator of the popular Minecraft game, has decided to ban developers from integrating NFTs in Minecraft or making any use of any blockchain technology on its platform. 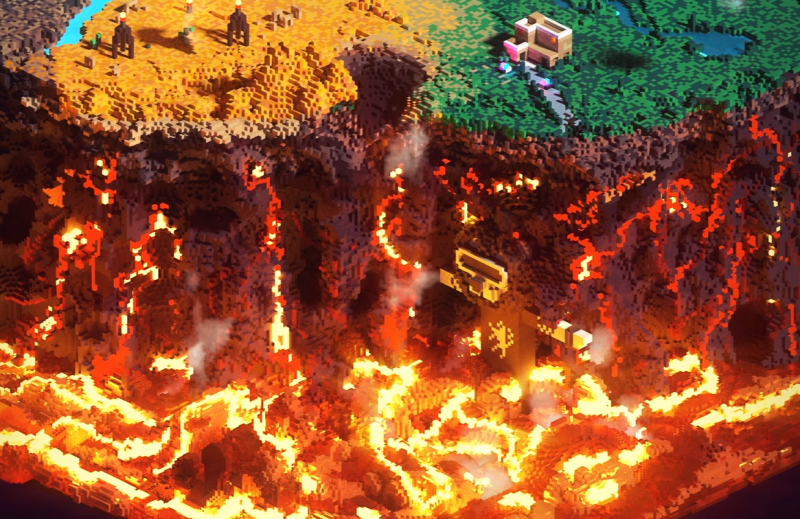 The internet heard it, and you might have heard it too. The company behind Minecraft—a play-to-create game—Mojang, decided it will not permit any developer to integrate NFTs or even make use of any blockchain technology on its platform. On July 20th, it published an official announcement on its website called "Minecraft and NFTs" that sounded the death knell of NFTs on its platform. As per the announcement, "integrations of NFTs with Minecraft are generally not something we will support or allow". 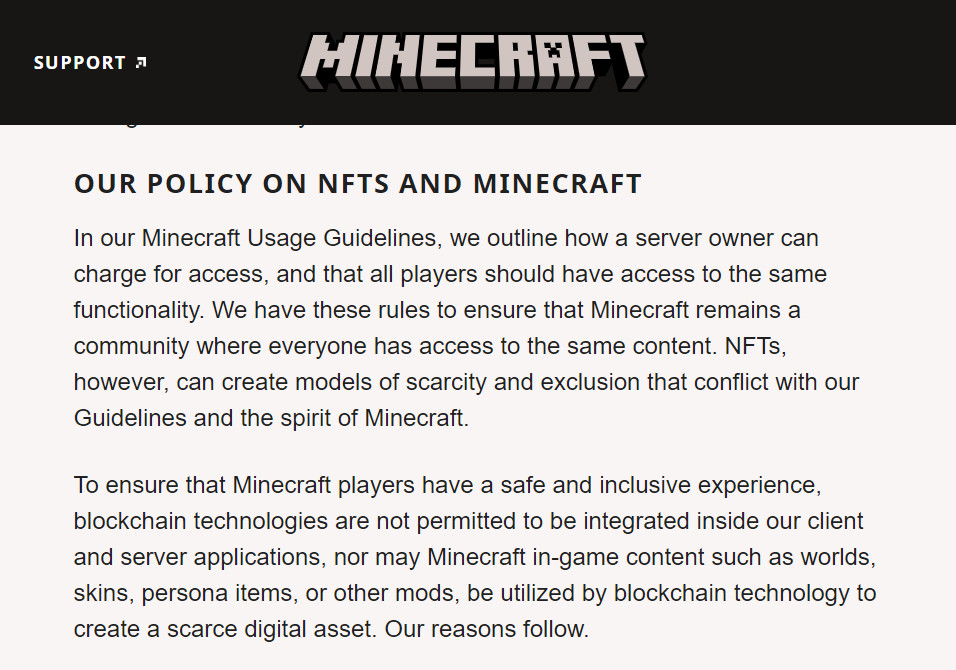 Minecraft—a play-to-create game— has decided it will not permit any developer to integrate NFTs or even make use of any blockchain technology on its platform.

This news took the world by storm, and within a couple of hours, tens of millions of dollars of NFT investments were gone-particularly that of NFT Worlds, one of the biggest NFT marketplaces for Minecraft users. At the time of writing this, NFT Worlds was trading at a fraction of its original price.

Naturally, a lot of players and developers were unhappy with the decision. So why did Mojang take the risk of banning NFT integration in Minecraft?

Mojang says it wants to provide an equality-based experience to every single user in order to make it fair and square for everyone. However, with the integration of NFTs, it can cause scarcity, which is against Minecraft’s vision.

So, to quite literally level the playing field, the company decided to ban blockchain technology. No one would be able to integrate NFTs inside the server applications, and none of the in-game assets could be used as digital assets to promote rare products.

In other words, Mojang is completely getting rid of any blockchain application or technology integration in the Minecraft client and server application. This includes worlds, skins, items, and other modes.

To put it simply, Mojang believes NFTs are unreliable technology and prone to scams.

But not everyone agrees. Epic Games released their savage response, disagreeing with Mojang. 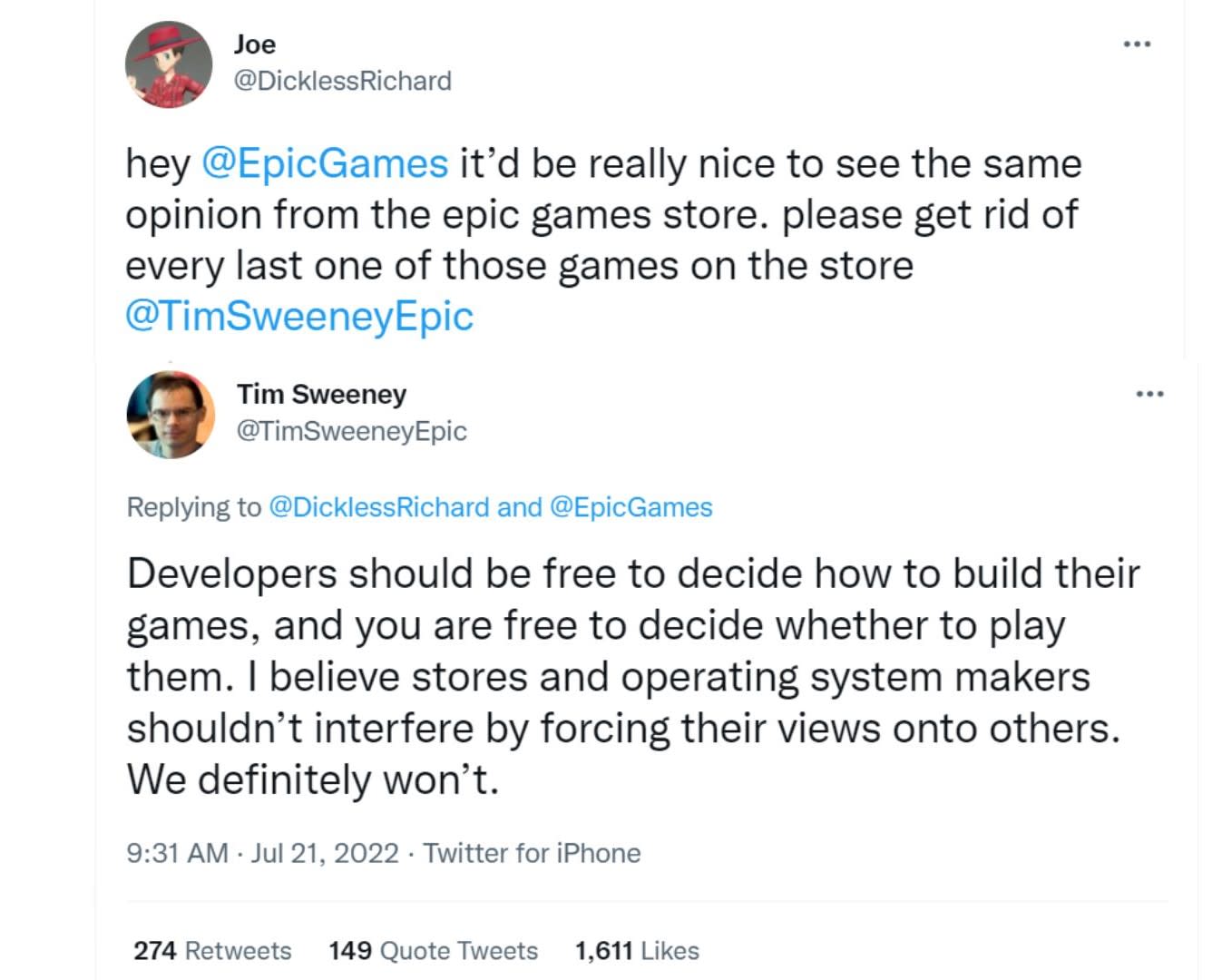 Tim Sweeney, the CEO and Founder of Epic Games said, "Developers should be free to decide how to build their games, and you are free to decide whether to play them. I believe stores and operating system makers shouldn’t interfere by forcing their views onto others. We definitely won’t."

Tim Sweeney, the CEO and Founder of Epic Games, replied to a user on Twitter by saying, "Developers should be free to decide how to build their games, and you are free to decide whether to play them. I believe stores and operating system makers shouldn’t interfere by forcing their views onto others. We definitely won’t."

While many users agree with Sweeney, the overall internet response, on the other hand, has been mixed.

The central point of the debate is around the developers’ freedom and various NFT projects that were underway. However, it looks like for now, a majority of those projects will be going into the trash.

The Future of Gaming NFTs

There are two sides to this story-equality for all players and freedom for developers.

Mojang is banning NFTs because they want an equality-based system where all the players will play and interact the same way with each other. No one will be superior to another.

On the other hand, Tim Sweeney states that developers should have the freedom to create whatever they wish and that the company shouldn’t force their opinions on players all of a sudden.

Amidst this chaos, there may be a tiny sliver of hope. Even though Mojang closed the door, it may have still left a window open.

In the statement, Mojang also stated that they will keep in touch with blockchain technology news and that will be the main indicator of whether or not NFTs and other blockchain applications can be integrated into Minecraft in the future or not.

Minecraft’s stand is undoubtedly a big deal. But a lot of other gaming platforms are slowly giving the green light to NFTs and web3 games. So the battle is not lost yet.