Milady NFT Controversy Scandalizes the NFT Space – Or Not?

The hopes for a completely rational and fact-driven digital era have not yet come to pass.

Last Friday really seemed to shake up the NFT space. A May 5th article published on Coindesk was making the rounds in the crypto space, revealing some shocking connections to the right-wing movement, Nazis, and a cult. But, as it turns out, these revelations were not so revelatory to many Milady holders, and the real controversy lies in whether one believes the creators’ explanation or doesn’t.

Let’s break it all down and take a closer look.

Milady NFTs are a collection of 10,000 generative NFTs released by the online collective Remilia. They look like 3D chibi-style girls rendered in retro computer graphics. The design of the characters themselves are attributed to digital artist Milady Sonora (or Sonoro), whose Twitter profile describes them as creative director at Remilia.

Miladys were first released last year, but they didn’t really start gaining traction in the crypto space until this spring, thanks to some Twitter influencers and venture capitalists such as Dom Hoffman and Tom Schmidt buying into the collection. At their peak in mid April, the floor price of a Milady was around 2 ETH. 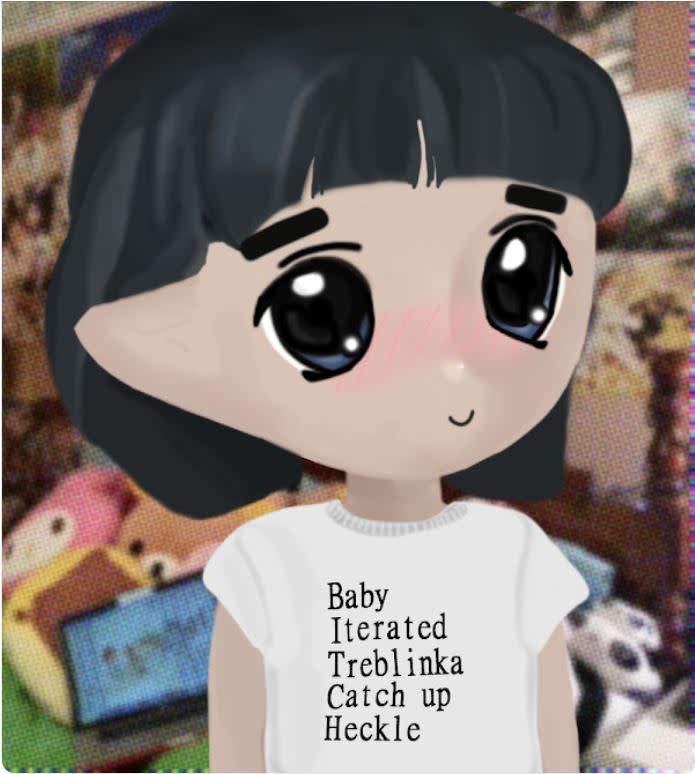 Coindesk’s article lays out three primary pieces of evidence to support their thesis regarding the Miladys creators’ shady motives. First is the use of “SS” as the top-tier drip rank, “SS” being a known Nazi dogwhistle. Next was the appearance of the word “Treblinka” (a lesser-known Nazi death camp) among the not-so-randomly generated words appearing on t-shirts in the spinoff collection “Milady, that BITCH.” Finally, Coindesk cites the claim that CEO of Remilia Charlotte Fang is connected to Kaliacc, a possibly-fictional white supremacist cult.

To each of these allegations, the creators of Miladys already had a response. In fact, much of this is old news. Remilia posted an apology for the Treblinka controversy way back in September. In their apology, the creators explained that the word came from comments made by Angelicism 01 in reference to Miladys, and they had only chosen the word for its aesthetics, ignorant of its meaning. This explanation was apparently sufficient, as Miladys went on to accumulate further value. 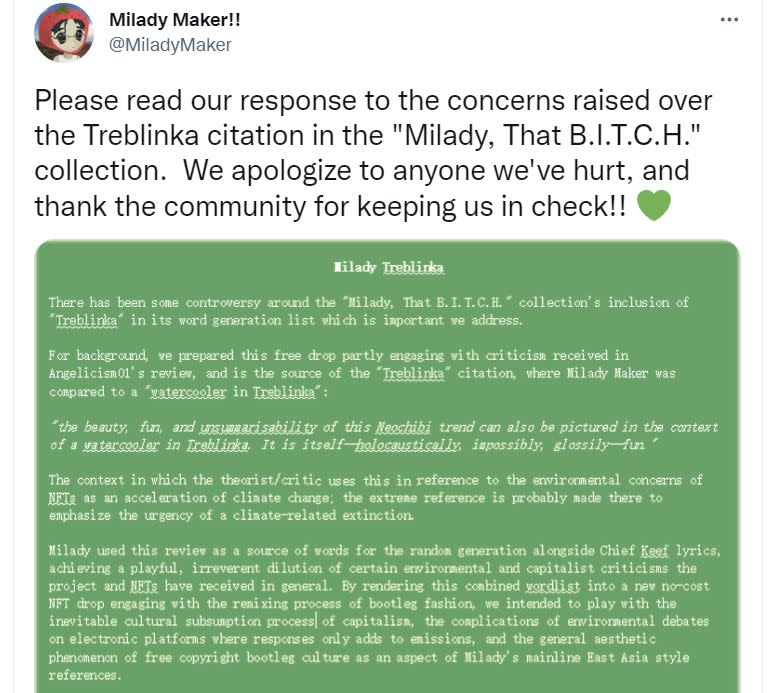 In that same apology, the creators cite that “SS” came from the Japanese video and card-game ranking system, standing for “Super Special.” This is true, as in Japanese games the highest ranking is S (not A), and some games may have an SS or even SSS ranking. It could just be, as the creators claim in their apology, an unfortunate coincidence as a result of Treblinka’s Nazi connection.

As for Fang, the CoinDesk article linked him to the Twitter account Miya, which was active from 2019-2020 and shared bigoted and disturbing tweets. The account claimed to be part of Kaliacc, a white supremacist accelerationist cult that turned out to be fictional. According to Fang’s thorough description of the collective behind the account, the whole thing, even the cancelling of the account, was one long troll. It’s highly plausible that he was to some extent involved in the project, and the fact that his own Twitter account was created in November 2020 indicates his current persona as a post-Miya one.

Fang’s defense of it all is as performance art. But let’s not forget that sometimes, in this society of the spectacle, the appearance of things matters more than the actual substance behind it. In this era of fake news, can one really believe that it was all an act?

Another, more serious allegation was brought forth by Twitter user planet nerf back in March, sharing claims that the team behind Milady and Miya engaged in grooming, masquerading as teenage girls in order to lure actual teenage girls into their cult. Charlotte Fang responded that the old domain name for Remilia.org was for an unrelated project, distancing the group from the grooming allegation.

Still, the fact that Miladys depict teenage girls and the fact that Remilia.org used to belong to a grooming cult raised red flags for some users. And upon viewing Remilia Collective’s Twitter account, all but one of their 2,824 tweets have been deleted. Not suspicious at all, right? 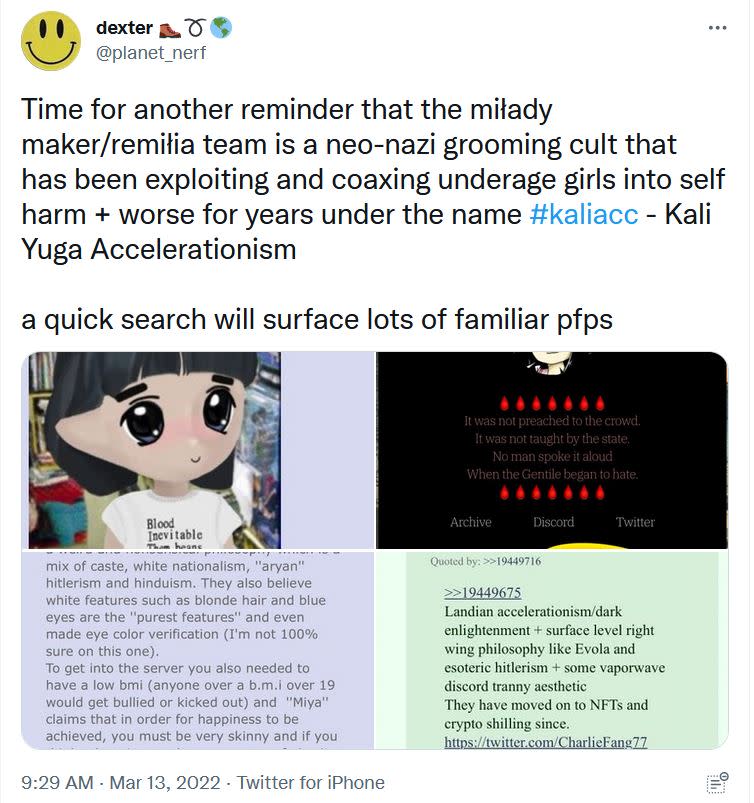 And as if that weren’t enough, on Friday Twitter user Cuteness shared a thread of screenshots from a Twitter group chat in which Charlotte Fang is an admin. The thread reveals apparent evidence that the founders of Milady were in fact involved in a groomer cult. And the text of the chats are pretty damning, with instances of racism, transphobia, and discussion on recruiting young anorexic women. Though, with the context and original source of the screenshots unclear, the content of the group chat remains difficult to verify.

The scandal’s impact — or lack thereof

As a result of the Nazi insinuations and the groomer cult connection, some holders have since sworn off the brand, regardless of the founders’ explanations. However, much of these facts had already been known to holders months ago, and it seems few have wanted to budge.

The article still made a swift impact. By Sunday, the Miladys’ floor price sunk from over 1 ETH to .69 ETH, with an average price of .8 ETH. And on Saturday, Charlotte Fang transparently disclosed that he was behind the Miya Twitter account and announced he would be stepping down from the Milady Maker project. 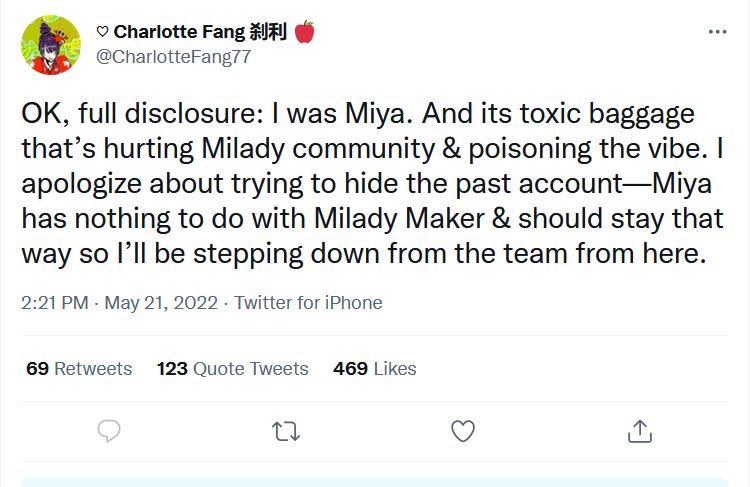 The Miladys creators deny only ill-intention. So the real question for holders and prospective buyers is, do they believe them? Or does something still not smell right?

If you ask me, it was all trolling – even the groomer cult. Granted, this kind of trolling is in extremely poor taste, at best. Let me explain by taking a look at what appeared to be yet another scandal unveiling last Friday, but quickly turned out to be nonsensical.

As if the Milady FUD weren’t enough, another bomb was dropped on a well-known NFT project on Friday. Twitter user Coasey posted screenshots alleging that World of Women NFTs were based the image on pictures of dead women. What’s more, the project was connected to convicted cult leader Keith Raniere. Shocking, right? However, upon searching the Times Union article ostensibly screenshotted by Coasey, the text implicating the digital artist is nowhere to be seen, though similar wording is found in a couple of sentences. Other screenshots are posts from 4chan, which have yet to be verified. Another clue as to the fabrication of the post is the fact that Charlotte Fang retweeted it.

Looking at the tweet's text, the allegation is immediately exposed as trolling: “murdered women in their last days.” People who are murdered usually have no idea it’s their last days before being murdered, so what does “last days” even mean here? Finally, looking at Coasey’s other tweets, he’s obviously a seasoned troll.

World of Women NFTs, who were present at this weekend’s VeeCon, have not responded to Coasey’s tweet, either too busy at VeeCon or taking the high road and ignoring the troll. Most responses to the tweet also call it out as fake, but there are a few who seem to be expressing genuine shock and dismay. Or were they also trolling?

What does this all mean?

The case of Miladys, with its open secrets and white supremacist insinuations, as well as the murky proof of Remilia’s groomer-cult past, brings once again to light the fact that you can’t believe everything you see on the internet. With every allegation, the accused can simply go on the defense by explaining away or denying it altogether. And with the advent of deepfakes, the amount of fakery that can abound on the internet is only expanding.

And whether you think posting fake but serious allegations is brilliant trolling or dangerous disinformation, these kinds of posts expose exactly how credulous we humans remain to be. We’ve come to believe what we see and what we read, even on the internet, a place originally famous for its anonymous fakery. So what does this reminder mean as we live more of our lives in the digital space? Can we really take what anyone says at face value? With so much information out there, how can we manage to verify every claim and explanation without exhausting ourselves to oblivion? How will we know when we encounter real threats, real bad actors? Must we go back to going with our gut?

The hopes for a completely rational and fact-driven digital era have not yet come to pass.

The world is still run by the very fallible whispers and whims of humans. No matter the facts, it’s still about our feelings, after all.

How (NOT TO) Sell Plagiarised Art for $1.5 Million