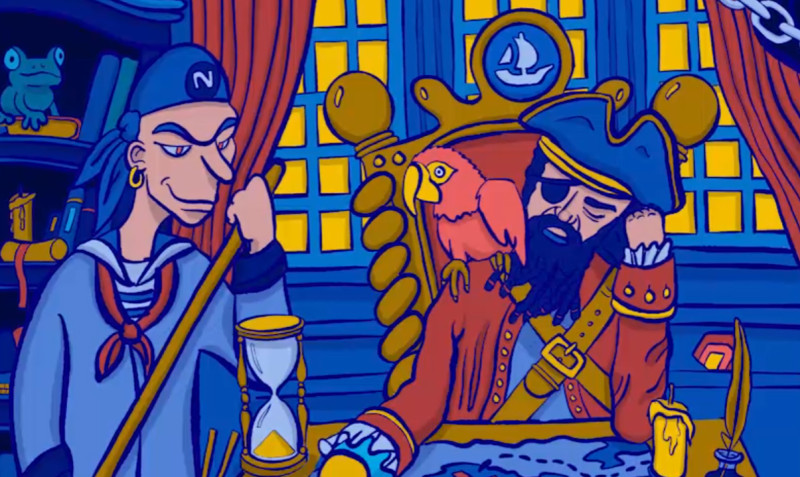 Bad actors are nothing new in the NFT space. But few are arrested by the FBI. On Wednesday, the FBI announced that Nathaniel Chastain, a former product manager of OpenSea, was charged with wire fraud and money laundering, committed in service of an insider trading scheme. According to the FBI, this is the first charge ever involving digital asset insider trading.

Part of Chastain’s role at OpenSea entailed selecting NFTs to be featured on OpenSea’s homepage. This information was kept confidential until the featured NFTs appeared on the homepage. As a result, the price of featured NFTs, as well as other NFTs by the same creator, blew up. 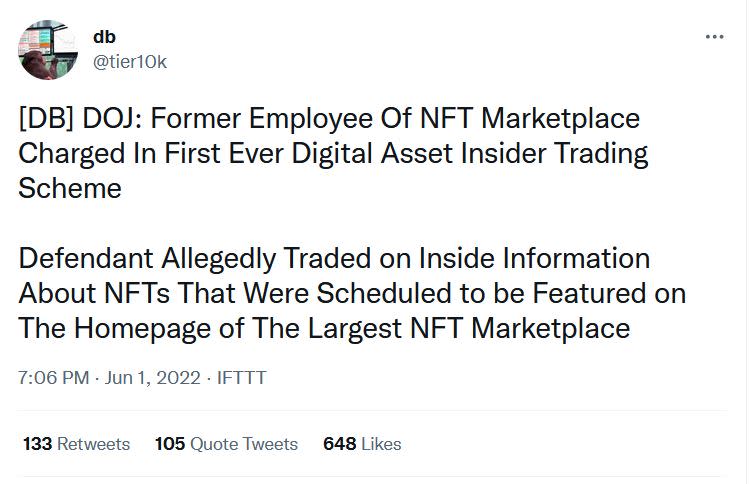 Chastain was apparently fired from OpenSea in September 2021, and his Twitter account has remained inactive since then. The insider trading took place from about June to September 2021, so it’s possible that there may be a connection between the charges and Chastain’s firing. However, OpenSea has yet to comment.

The FBI enumerated eleven separate instances in which Chastain purchased NFTs shortly before they appeared on OpenSea’s featured page and selling them afterwards, in one case within hours of purchase. Not a great way to cover your tracks, buying and selling at such a rapid rate. Even using an anonymous account. Still, Chastain was able to get away with flipping 45 NFTs before OpenSea fired his ass.

The NFT community, as it often does, expressed a wide range of opinions on this. Many were not surprised, wondering when they were going to go after all the rugpullers. Speculation about the meanings behind the specific charges of wire fraud and the term “insider trading” also took place. Others worried that this case could lead to something more sinister that broadly affects the NFT space and crypto as a whole.

NFTs and the SEC

What otherwise would be a routine report of an arrest for financial crimes has some of the crypto community on edge, as the news suggests that the FBI may now be viewing NFTs as securities. This has wide-reaching implications for everyday NFT traders, well beyond the bad actors in the space. While they are not classified as securities, NFTs are sometimes used in ways that may fall under that umbrella — and therefore violate the SEC’s rules.

Just a few months ago, the SEC launched an investigation into whether some NFTs have been utilized as securities. The result of that probe has yet to be determined, though chilling effects are already in place. Several Solana NFT projects, for example, canceled holder royalties after marketplace FTX US announced that they would not list such projects to comply with SEC regulations.

To be clear, the use of the term “insider trading” is not exclusive to securities, but rather a catch-all term for various kinds of fraud, as lex_node pointed out. Chastain’s most likely in trouble for breaching his contractual relationship with OpenSea, in which, presumably, insider information on NFTs was not meant to be capitalized on.

And for now, these charges are just that: charges. Chastain will go through the usual legal procedures before being convicted or acquitted. But the case presented by the FBI implies that they have ample evidence to prove it.

NFT regulations on the horizon?

While the NFT space is long overdue for some accountability on the part of bad actors, some would (not wrongly) question whether powerful centralized entities like the FBI and SEC are the ones to enforce it.

This latest development signals yet again that Wild West era of NFT trading may be coming to an end. The question is, what will it look like once the dust settles, and who will be caught in the regulatory crossfire.

The Pirate of OpenSea