He has a long history of using blockchain tech to explore the nature of art, fiction and reality.

Mitchell F. Chan is a legend of the NFT Space. His work has always pushed boundaries and experimented with the potential of not just digital art - but art more generally. After an announcement in his Discord on 6th June, Mitch revealed a demo of his next big art project: Beggars Belief. Layering reality upon reality, the project is part world-building, part meditation on the nature of fiction, part video game, part exhibition…the list goes on. Beggars Belief will go fully live in December and it’s set to be game-changing. 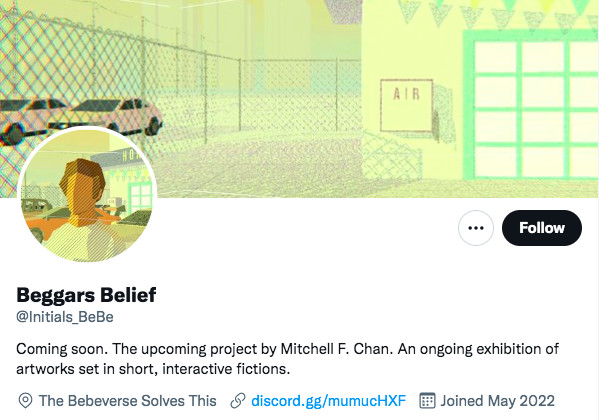 Questioning the nature of art

Mitch has a storied history. As far back as 2017, in the fledgling days of NFTs, he minted 'Digital Zones of Immaterial Pictorial Sensibility.' Not only was this one of the first pieces of NFT art to be displayed in a legacy gallery, but it also explored the very nature of art. It used tokenization as a way to examine the separation between ‘the commodity form of an artwork from the experienced form.’

This separation of experience from commodity - the relationship between the art and the consumer, the artist and the witness - is essential for understanding Mitch’s practice. He's interested in conceptual border areas and separations. Beggars Belief will explore similar divides when it goes live in December. Mitch is also famed for his essays (again tackling the artistic implications of blockchain technology) and his LeWitt Generator Generator. His sculptures have also been widely exhibited.

In short, Mitch is more than just an artist. His work is thought-provoking and poses questions about the nature of art itself. Beggars Belief is no different. In Mitch’s own words, it will be “an ongoing series of artworks and exhibitions set inside short interactive worlds. The artworks are real, the worlds they exist in are fictional.” Tantalisingly, Mitch also suggests that you can flip that statement if you would prefer.

A layering of fictional worlds

Beggars Belief will be a story-driven project delivered initially via 4 episodes. Every episode will be fully interactive as you move through the world of the story. In his announcement, Mitch describes how some of these stories will seem like classic point and click adventures, others more like rhythm games or “endless runners.” Each will revolve around an artwork, an artist or some kind of “artistic act.”

Perhaps the best way to understand Beggars Belief is to look at one of Mitch’s biggest influences for the project: Jorge Luis Borges. Often regarded as one of the greatest writers never to receive a Nobel Prize, Borges’ work is mind bending and labyrinthian. It questions the nature of our reality and builds worlds within worlds, creating a layering of multiple fictions. This is exactly what Mitch wants to achieve with Beggars Belief.

He outlines how Borges had an idea for a 700 page novel. Rather than writing the novel, he would instead write about a world where the novel already exists. Transposing this idea onto Beggars Belief, Mitch explains that the simplest example is to imagine a virtual museum. The museum is full of sculptures. They exist in the world of the story, but they also have another tangible reality; they can be purchased and put on display in a “real world” museum. There are two realities at play: the objects exist both in the fictional and real worlds.

Mitch dropped a demo of Episode 6 (proof of just how far the project is mapped out) for his Discord community. We can’t share the link right now (Mitch specifically avoided sharing it across social media as he looks to iron out any potential bugs and inconsistencies) but suffice to say…it more than whet our appetite for what’s to come.

The demo only shows 3-5 minutes of interaction with Beggars Belief but reveals some crucial dynamics. The artwork is clearly in the style of Chris Pratt, giving the world a soft, ethereal vibe. Your character walks along the street as gentle lounge music plays in the background. The story has progressed to a point where you work for an artist and have been tasked with buying them a used car. There’s dialogue and a “choose your own adventure” style of gameplay on show. Your character visits a used car dealership and purchases a car - which can be minted as a token (an early example of those two realities merging). 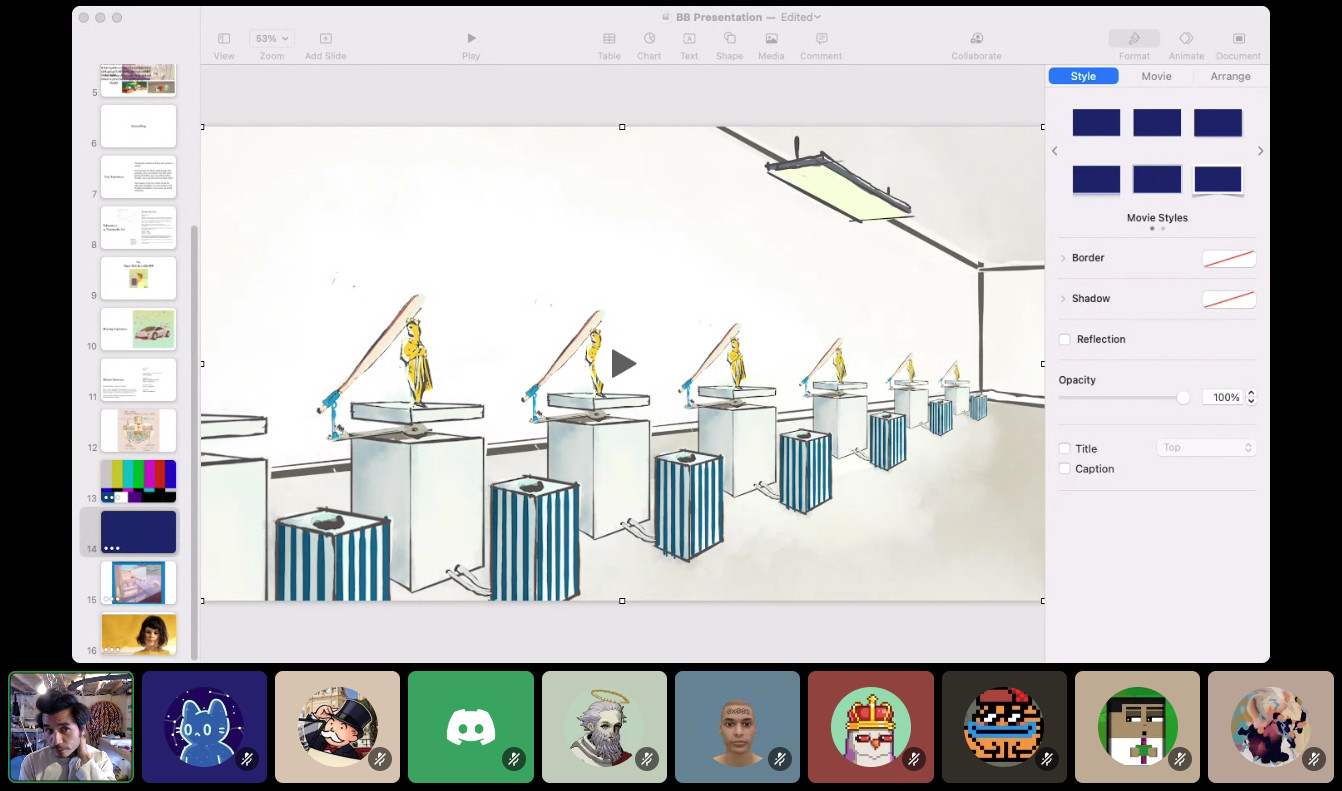 A tweaked version of the demo will be made fully public on 15th June. Beggars Belief is significant for its multi-tiered approach to world-building.

Beggars Belief will go live in December, and it might just change how we conceptualise digital art, digital worlds and the Metaverse itself.