$ENS Then $SOS - Now $GAS? Did People Miss the Point on The New Airdrop? 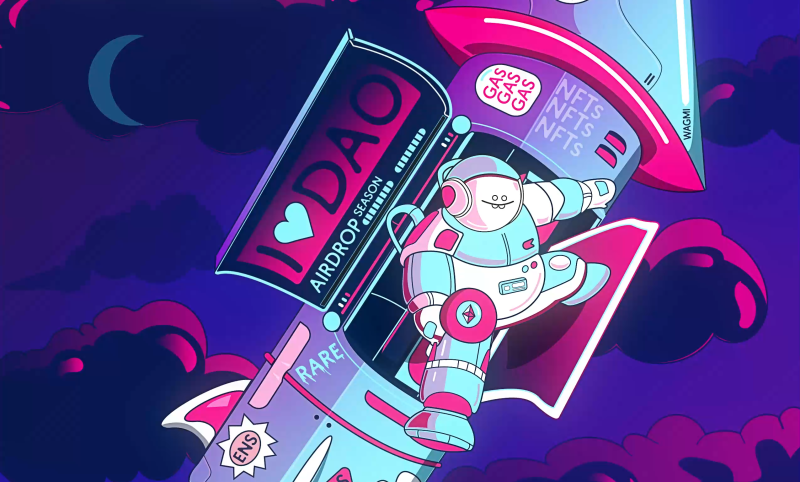 Well it's certainly been an eventful week in the NFT community at large (it always is really) with OpenSea airdropping $SOS to great fanfare and praise last week and now the absolute skyrocketing of $GASDAO overnight. The Twitter sphere was set on proverbial fire with the drop on December 28th by @saedmyster (Bobby Axlerod) and his team. In fact the token blew up so fast that the team seemed to be in a mad scramble to answer the community's slew of questions.

On a Twitter space live interview with Axelrod you could hear the quiver in his voice as he kept reiterating that the team needed time, that they thought it would get this big but not in 12 hours - more like 6 months. Part of the reason for the quiver was surely being overwhelmed with the incredible response to the project, the other seemed related to the sudden attention.

There was talk from one of the hosts during the Twitter live that they saw what they believed to be South East Asian whales swimming and watching closely within the metaphorical waters with 1000 people listening in. It would certainly make sense if that is the case and could correlate to the meteoric rise of the token. It certainly looks like things are moving around when you look at the Crypto markets since $GAS dropped.

Regardless, people had questions, lots of them. For Axelrod's part he seemed genuine on the call and did a good job of answering most of the questions over a rather long affair. The main question that seemed to rattle him most was in regards to how many tokens he and the team would be holding - a whopping 20% - and what they intended to do with them.

On what seemed like a bit of shaky legs he kept getting asked about who these 24 - 25 people on his team are and what they are doing for the project - what are their motivations? He answered by citing the individual members of the team's request for anonymity and continually declined to name all but 3 of them including himself.

On one hand, it's the Crypto & NFT community. Anonymity in general is a widely held tradition for many people in this world. On the other hand, a lot of money just changed hands in an instant and there were certain members of the space that were none too impressed with the way tokens were allocated - or if they were at all. 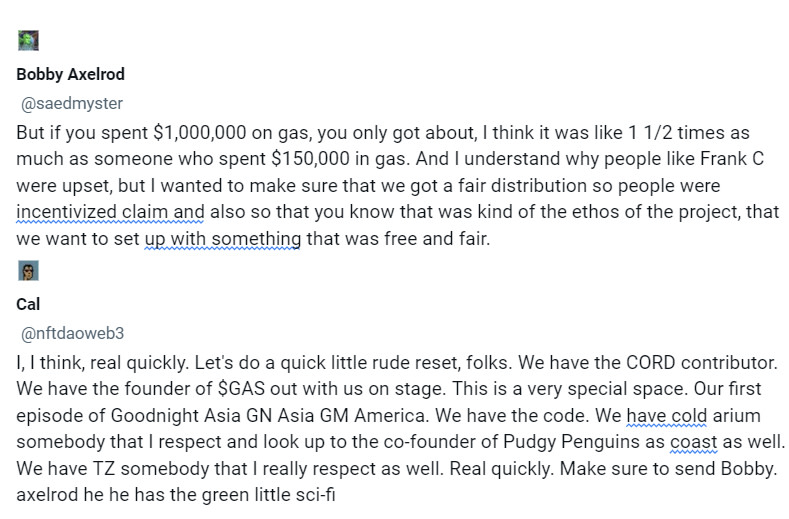 Across Twitter as well as their Discord server there were mixed reactions once the fire caught on, with some people reporting issues while claiming tokens, even a few that had real trouble with their trust wallets catching error messages. Where others seem to believe this is in fact the next big thing.

There were also more in depth critiques that brought up valid questions regarding the project and its 25 "core" contributors who would be allocated a rather large amount out the gate as well as many other aspects: 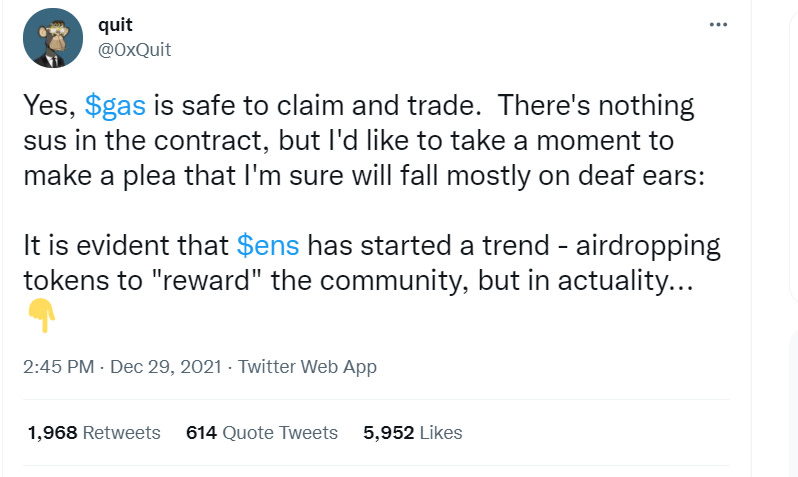 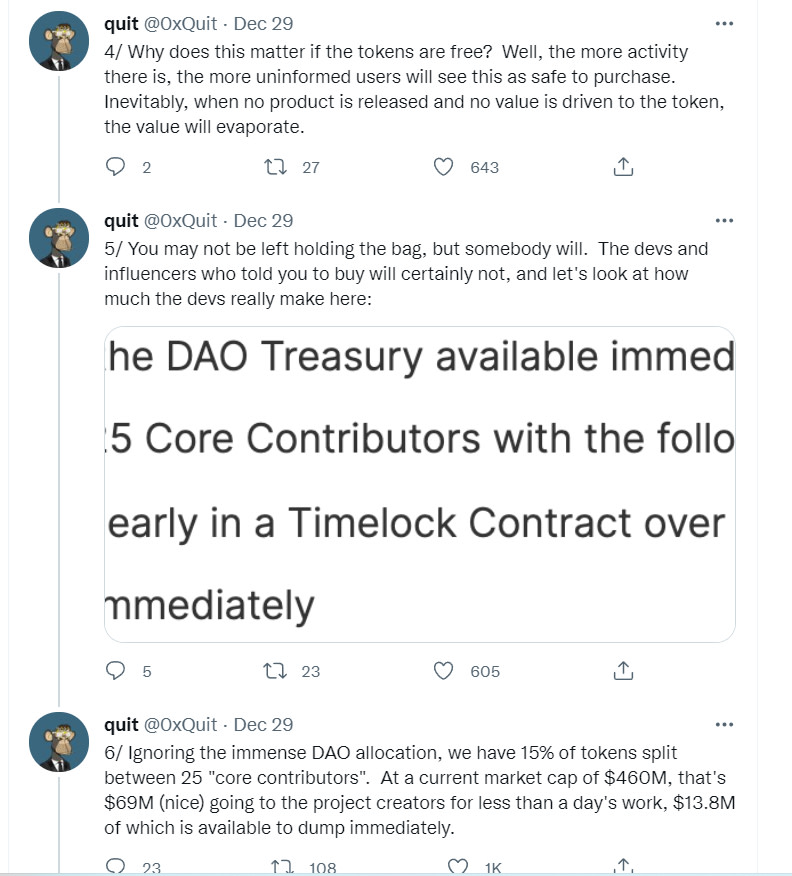 It was nothing if not a mixed bag across the board for sure and it looks like there will be some explaining to do based on people's input. Within the Discord there was running a rhetoric about $GAS costing more GWEI than the token is worth. That to me would point to a host of people having completely missed the point of a governance token. Sure you can't stop people from gambling with governance tokens, there will always be traders out there looking to pump and dump anything perceived as viable they can get their hands on. But perhaps a bit more clarity up front could have cut this off at the pass.

In comparison with the $ENS airdrop the team said something to the tune of "We didn't airdrop you free money, we airdropped you responsibility". This statement is extremely straightforward and sets the tone for engagement with the token right out the gate. I guess in some way it was $ENS that really started the trend when they airdropped the token to all users that previously owned an ENS address.

Also, they had an existing infrastructure and voting abilities in place from the get go, so it was very clear that this was about proper governance by the people - not flipping tokens for profit. Perhaps that may be a reason that some people missed the point and are upset regarding $GAS and how much GWEI it costs to get the token. It's not meant to be a direct investment in the same way as buying up a hot coin like SHIBA or DOGE and selling it off at the right moment, it's an investment in the future of the space itself.

The issues with people trying to claim the token, not receiving it and being charged gas during the process is another situation entirely. That said, it does seem (Not Financial Advice) that Axelrod and crew fully intend to button all this up and take care of those who took on the token or attempted to. Whether that is the case or not should become clear in the coming days and weeks.

In a second Twitter Space on December 30th Axlerod introduced devs Claude and Terrance to give a bit more clarity on the project and do a deeper dive into their roadmap as well as connect again with the community. Axelrod certainly sounded much more confident this time around and it seemed the team was organized and didn't need that much time to stabilize after all.

I attempted to get on stage and ask a few questions for this article, unfortunately I was unable to do so - though I am doing what I can to reach out directly anyway for a possible follow up article at a later point. During the event they covered the overall vision of giving those Etherium users that spend a lot of gas a voice in what proposals will be put forth by the DAO and squashed some of the rumors about how this DAO will operate within the space.

So with all this in mind, how viable are these drops? There seems to be a lot of questions about devs and how much money they make in short periods. It goes without saying that we will certainly be seeing a lot more of them in 2022 that's for sure. But is this a good thing for the community overall? With $SOS you're talking about an unaffiliated non-doxed group creating something around one of the most used NFT marketplaces on the planet rewarding existing users with airdropped tokens. You really can't go wrong with that. In the case of $GAS, you have outside devs cooking up a project that certainly sounds good when you read the roadmap: 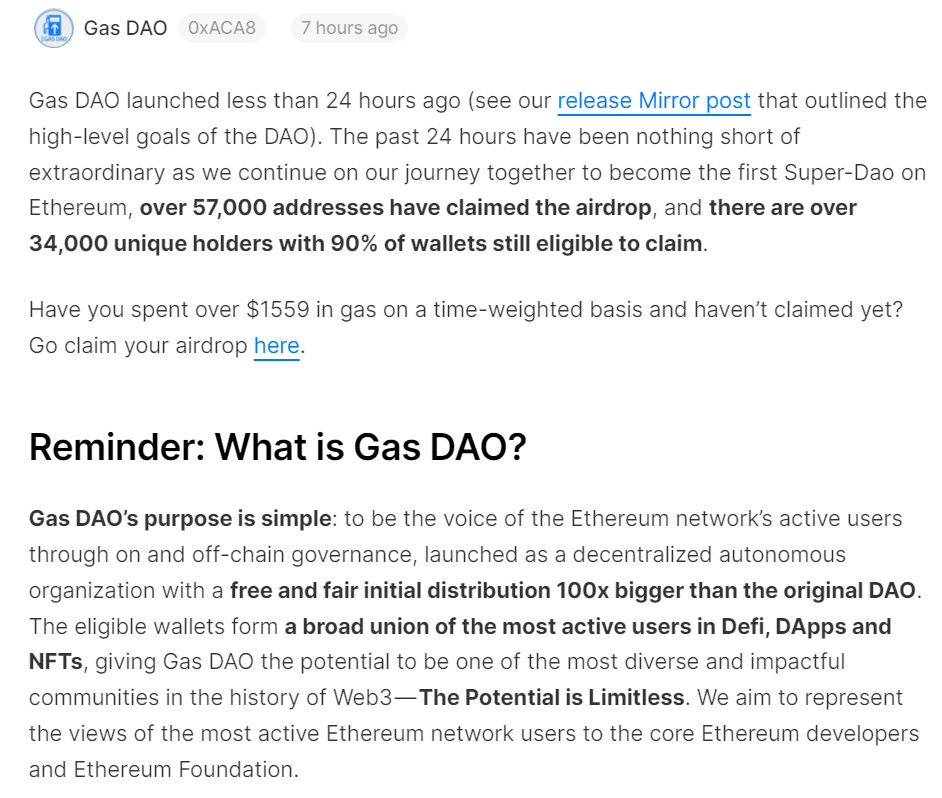 I mean, I'm in right? It sounds fantastic if it all pans out. It's a massive, sprawling vision to bring ETH users together and give them a voice that they didn't have before in the spacet. But one has to wonder, who are these 22 anonymous collaborators? What do they want out of this project? We can't ask them as of yet and have to take Axlerod on his word that they are benevolent.

At the moment, $GAS is brand spanking new. So I suppose people have to give them a bit of time and see if they handle the process as well as $ENS did and if all they have promised will happen in a timely fashion. I'd like to think that they will, but I'm no fortune teller and am not a fan of crystal balls.

All in all, $GAS may be something to watch coming into Q1 of the New Year. It seems to be a realistic prospect for the most part. One that could very well change "the shape of punk to come" as it were. Here's to hoping that $GAS will achieve its rather large vision - it certainly looks like it has enough interest to work at this point.

On the other hand, hype can be a double edged sword in many regards and is generally unsustainable by its very nature - even the great Johnny Cash became a dead asset to his label at some point in the 80's. A zero to hero situation can be awesome but it puts a lot of pressure on a newly formed team - especially if they weren't expecting it.  In the end, who doesn't love an ambitious, community driven project that catches fire, as long as it doesn't sink the ship…