In an example of things escalating fast, the Founder of Terraform Labs is locked in a multi-million dollar bet over the fate of his company’s token, and all because of a few tweets 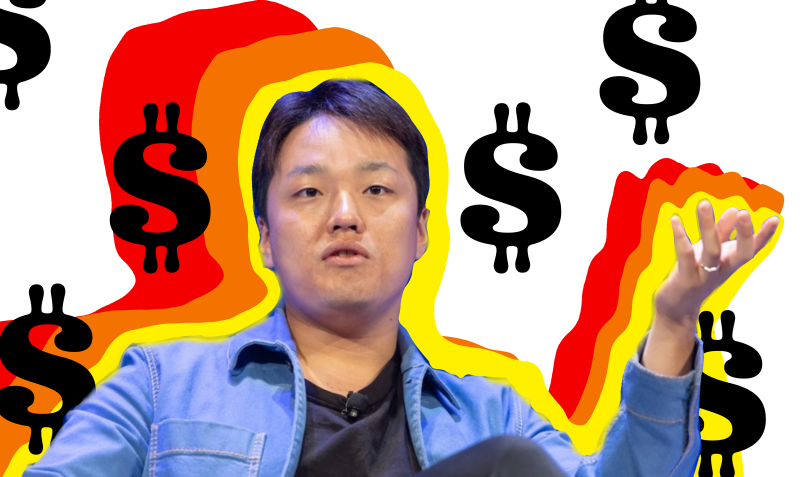 What’s the largest bet you’ve ever made? Do Kwon, founder of Terraform Labs, has accepted a $11 million wager that the company’s token will be valued higher than $88 in a year. LUNA has largely bucked recent market trends and continued to rise (hitting an all time high of $104 in March), leading to bullish sentiment amongst many investors.

A high stakes gamble on the future of LUNA

Many, but not all. Sensei Algod is a long time critic of Terra and has even likened it to a Ponzi scheme. On March 13th he took things to a whole new level by offering a $1 million bet that LUNA will be priced lower in a year. In response, Do Kwon simply replied “Cool, I’m in” before adding that he would prefer to make the bet 90% of Algod’s net worth. He also threw some shade by suggesting “maybe this is what that is.” 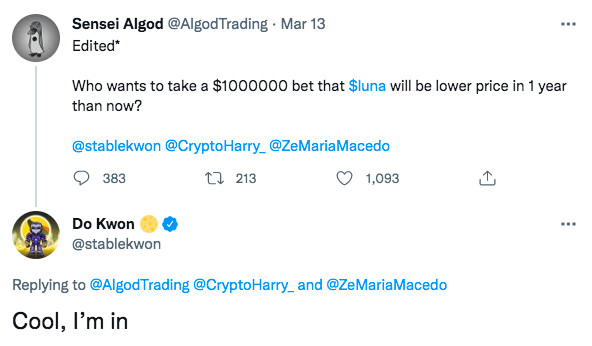 Both parties have since put their money where their mouths are. The funds will be held in escrow until the bet settles. This means that they’re held by a third party, in this case Cobie, co-host of UpOnly, a popular crypto podcast followed by over 650k people on Twitter. $1 million of UST (Tether’s stablecoin) was transferred to an address now marked “Cobie: LUNA Bet Escrow.”

If that wasn’t enough, crypto trader GCR waded in offering the same bet for $10 million and promptly transferred his funds to the escrow wallet. Cobie jokingly tweeted that $22 million is below his rug threshold so the funds are safe for now, unless anybody else would like to get involved and pump the bet into the hundreds of millions. 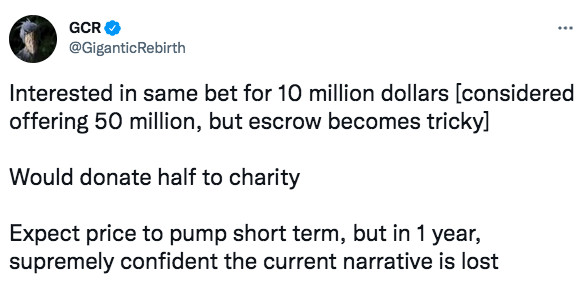 A thrilling year ahead

GCR outlined the terms of bet in more detail. They’ll look at the 24 hour average price of LUNA on 14th March 2023, using liquid exchanges. The bet is voided if a redenomination takes place. Do Kwon tried to up the ante even more and offered 2/1 odds on UST not being depegged by this time next year, but nobody took him up on it.

A year is a very, very long time in crypto. GCR explained his price prediction for LUNA, suggesting that he expects a short pump followed by a decline. Algod has since doubled down as well, tweeting that LUNA is even worse than he previously thought and that the team is “basically printing 10bn+ out of thin air.”

Twitter users have been weighing in. One thanked the trio for making the next year in crypto extra spicy, and many others set tweet reminders using “Remind me of this tweet.” Algod acknowledged that he didn’t expect the wager to blow up in the way it has. He’s since assured followers that he’s feeling confident and won’t try to hedge by purchasing LUNA.

Will LUNA prove its critics wrong?

Whatever your thoughts on Terra and LUNA, this wager is risky. LUNA recently overtook Solana and Cardano to be the seventh biggest cryptocurrency by market value. It forms a dual token system with the stablecoin TerraUST. LUNA is burned to mint UST, giving the token value. It enjoyed a strong end to 2021 that’s continued into 2022 despite more tempestuous market conditions and downturns elsewhere.

Terra’s 2019 white paper outlines their vision to maximise cryptocurrency adoption by offering a coin that’s simultaneously “price-stable and growth driven.” The signs around the token are almost universally positive, but that’s not stopped some investors from having their doubts. Critics have expressed concerns around LUNA’s tokenomics and the possibility of a death spiral. The mechanisms around LUNA mean that if it began to lose value rapidly, more and more tokens would need to be burned to maintain the peg with UST. This would ultimately lead to depegging.

It’s worth noting that the team behind LUNA has taken proactive steps to safeguard against catastrophe, including raising a $10 billion Bitcoin reserve. The current bullish sentiment around LUNA also means that demand should continue to outstrip supply, keeping that death spiral at bay. Algod and GCR are banking on a collapse of that confidence, panic selling and the mass redemption of UST for LUNA.

It’s a brave individual who tries to predict how this wager will play out, but there is one guaranteed winner. GCR has pledged to donate half of their winnings to charity. Do Kwon will donate $1 million to Angel Protocol, a protocol for creating perpetual charity donations. He isn’t, he claims, in this for the money. Everyone involved is almost certainly wealthy enough to cover their losses, but the charitable donations represent a positive angle on this game of crypto one upmanship.