How (NOT TO) Sell Plagiarised Art for $1.5 Million

The NFT space is rife with plagiarism, but few attempts are as audacious as trying to resell another artist’s $35 work for $1.5 million. 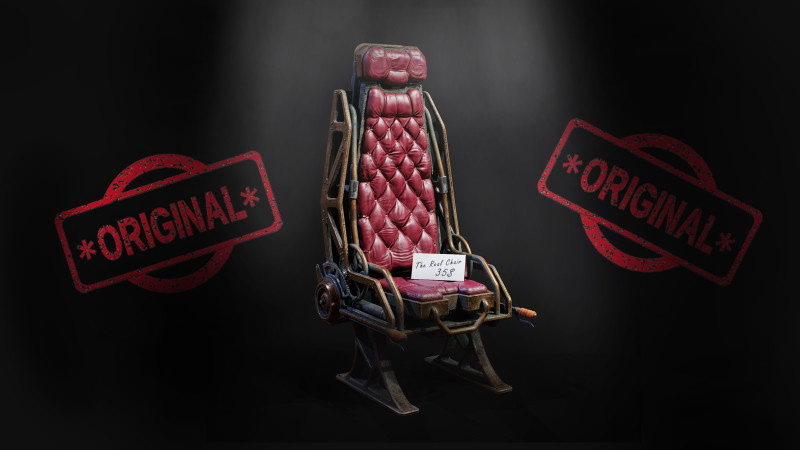 Dangiuz is an artist on SuperRare with over 1000 ETH sales. They’re followed by 50k users on Twitter. Valentin Winkelmann has never even dabbled in NFTs and works as an independent 3D artist and game designer. When Dangiuz took Winkelmann’s $35 design of a 3D, steampunk chair and put it up for sale as a collection worth $1.5 million, NFT Twitter went into meltdown.

A side by side comparison

The story begins when popular NFT artist Dangiuz (their pieces routinely sell in the region of 50-70 ETH on SuperRare) dropped a new collection on NiftyGateway. Simply entitled ‘The Chair,’ it consisted of 999 steampunk style chairs with a countdown to minting. Given Dangiuz’s profile, it’s reasonable to assume that this collection would have sold out in the blink of an eye, raking in nearly $1.5 million.

Except something was wrong. NFT collector and self-professed Crypto OG Paddy Stash noticed that 'The Chair' bore a more than passing resemblance to a piece of 3D art created by Valentin Winkelmann. As this side by side comparison shows, the two pieces are all but identical: 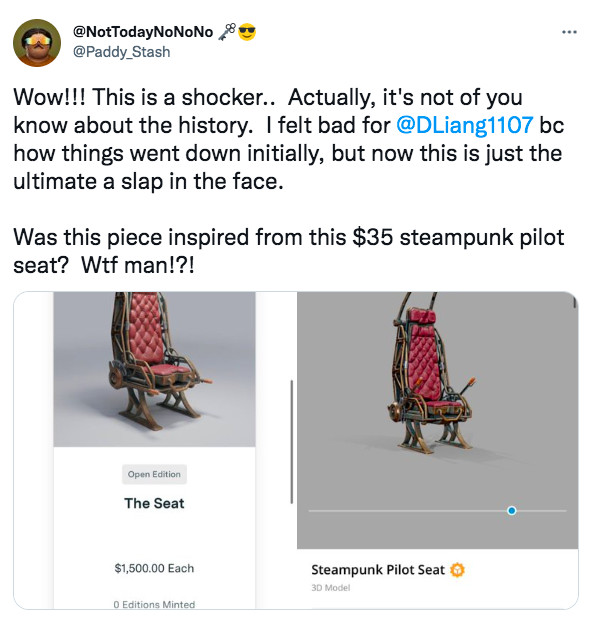 News spread fast, reaching Winkelmann. He took to Twitter to express his hurt, explaining how the situation left him feeling “victimised.” The thread even took aim at Dangiuz personally, accusing them of having no shame, placing no value on art and draining artists “to the bones.” Winkelmann also offered a little background information on his career. He mainly sells 3D designs on Sketch Fab but suspended all sales upon hearing what happened. Although his 3D models are for sale (Dangiuz bought one) they’re not meant to be reproduced and resold with no or only minor alterations. In Winkelmann’s words, buyers are supposed to “make a cool scene out of it, make a super awesome rendering or use it in an #indiegame.”

Dangiuz’s drop was postponed, but it’s unclear whether this was Niftygateway’s decision or their own. Winkelmann was bombarded with messages of support. He was clearly amazed at the reaction, tweeting that he’d spent over 4 hours replying to kind messages and hadn’t even been able to read all the comments yet. Next (and with the help of Paddy Stash) he was invited to sell his original 'The Chair' on SuperRare.

Anyone who has ever applied to SuperRare will be painfully aware of how long the acceptance (or in some cases, rejection) process takes. For Winkelmann, it was expedited to a matter of days and his version - the original and true version - of 'The Chair' was put up for sale. With a reserve price of just $35 it wasn’t targeting quite the same dizzying heights as Dangiuz, but collectors had other ideas.

Bids stacked up fast. With the auction coming to an end the highest bid was 10 ETH, made by none other than Dangiuz themselves. That looked to be it until, in the last 40 seconds, another collector upped the price to 11 ETH, securing 'The Chair' (along with a piece of NFT history) for themselves. That collector was Kaprekar, and this is what they had to say:

“The chair has an incredible story. The 10 ETH Bid would not have been a satisfying ending to this story. The NFT community won over an artist who had previously been deeply sceptical of NFTs. This bid would likely have negated that win & the 2 artists involved would not have been reconciled. I don’t know where this story ends but I’m hopeful I nudged it in a better direction.”

What could easily have turned into another negative story about plagiarism became an unlikely feel-good tale. Winkelmann has since expressed his gratitude to everybody involved and appears to have fallen in love with a community that he was previously suspicious of. According to him, the kindness well outweighed the hurt caused by Dangiuz.

NFTs and the problem of plagiarism

Dangiuz was quick to defend themselves and hasn't admitted any guilt other than to vaguely apologise for "frustrations." They claim that they bought the 3D model only as a placeholder that collectors would subsequently burn to receive a unique token later. Although they acknowledge that a custom artwork would have been more “appropriate,” they don’t seem to think that they’ve done much wrong. On the original comparison tweet by Stash, Dangiuz wrote “what’s with the 3D model outrage?”

Although this is the highest profile plagiarism accusation levelled at Dangiuz, it isn’t the first. In the same tweet that flagged 'The Chair,' Stash also linked to Daniel Liang, an artist whose cyber landscapes bear a striking similarity to some of Dangiuz’s most popular pieces. According to Liang, he was willing to let the imitation pass as inspiration but has begun to receive messages accusing him of plagiarising Dangiuz. People simply presume that the bigger artist must be the original creator of the work. Liang admits that there’s a grey area between someone getting inspired by and straight-up copying another person’s work, but he’s obviously aggrieved. 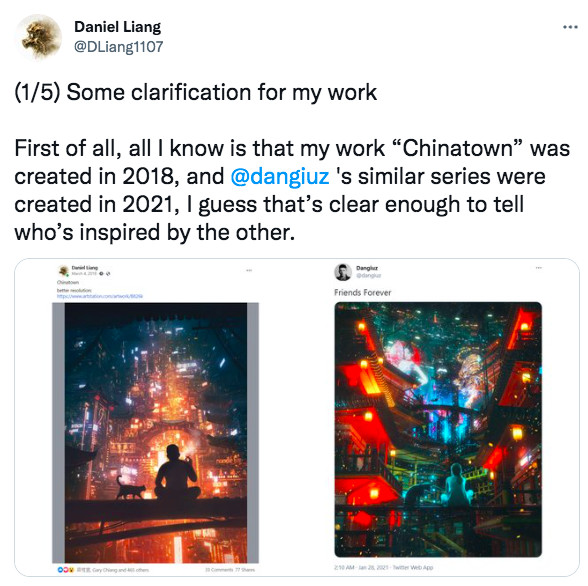 This story yet again highlights the plagiarism problem that's becoming endemic in parts of the NFT space. The necessarily deregulated nature of NFTs makes it all too easy for people to steal the work of other artists, mint it and profit. 'The Chair' sparked a debate on how this practice might be combatted, with AI being one of the most popular ideas. Software could be developed to scan new NFTs at mint, flagging any that could be plagiarised, although that doesn't seem likely right now. This time, at least, the vigilance of the community paid off.

What’s the Difference Between Inspiration and Imitation?